Finally got to sit down and do a little game playing and the next game on my list was Strike Suit Zero from Born Ready Games. What a great twitched based shooter this game is, if you like fast paced action this game will be for you. I like the combat a lot and it is very challenging especially when you are trying to attain completion medals (I have yet to get a gold), so definitely not a cake walk here.

So what is Strike Suit Zero about?

In the year 2299, an interstellar war rages on. In a bid to save Earth from destruction, you must take control of the Strike Suit – a revolutionary fighter craft with the ability to transform into a lethal suit of space armor. Immerse yourself in massive fleet battles where your dog-fighting skills will directly affect the fate of the cosmos.

Here is the game trailer:

You will play out this action packed adventure over 13 missions, yeah I know what your saying… only 13 missions. But they are long missions with a good narrative, and you might just have to redo some missions like me when you want to get the completion medals or you missed the objectives to get the ship upgrades.

Besides the dog-fighting there is capitol ships, frigates, supply platforms, guard turrets, torpedoes and much more you have to take out during your missions. Not always knowing what you will face in your missions can really work on your resources, I found out a few times that I should have conserved missiles better or chose my load-outs better.

So there is definitely some planning and trial and error to successfully completing all of the missions to Strike Suit Zero.

I haven’t completed the game just yet, but I will and I think I have enough of the game under my belt to rate it and here is a few pros/cons that I have seen during my play time:

All-in-all Strike Suit Zero is a solid performer and its been a while since I played a game that is this full of action and the missions are nicely scripted too. Yeah there was some things I had hoped would be in the game like, being able to take suit form and land on the hulls of ships and engage them up close and more destructible ships with debris everywhere. I don’t think you would regret picking up this game and I would rate this a solid 87 out of 100.

I will definitely have to update my gaming rig to witness Strike Suit Zero on a three monitor setup or in very high resolution like in this video:

Have fun with it and please do support the devs and get this game and make sure you discuss your experiences in the forums. 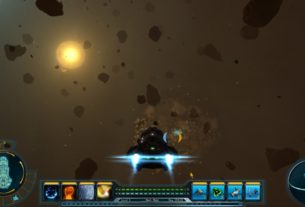