So what is this FFED3DAJ thing then & how to install it?

First of all, FFED3DAJ is not a stand-alone game that will run 'out of the box' - it's a continuation of the FFED3D project and aims to stabilize it, fix the outstanding issues and to add further enhancements. The aim of FFED3D was to update JJFFE for "modern" (2008+) PCs and add 3D models and effects using DirectX9. Before that, JJFFE updated the original Frontier: First Encounters (FFE) to be playable on Windows 95 systems.

So - FFED3DAJ requires the texture/model assets of FFED3D to be playable. If you are starting out from scratch then you will first need to download and install a base pack. There is the choice of the smaller, standard FFED3D beta1.12++ package or Ittiz's beta3 package which is significantly larger but it includes all of the up to date models as well as those infamous videos!

The original FFED3D beta1.12++ is available from Elite-Games.ru: full beta. Registration is required to post to the forum and download files, but is free to join. It's a Russian language site, and the home of the original FFED3D project started by DreamZzz. Chrome users should be able to automatically translate the site and register with / navigate it.

Alternatively, browse the Download Terminal here at SpaceSimCentral which hosts a choice of two updated packages:

The files are located within the main folder "#-F", then "FFED3D".

You will need to register as user here to post to the forums and to download files, but joining is free.

If you grab either of these two base packages, then be forewarned that they are archived using 7zip (.7z) which is open-source, freeware. (Owners of WinRAR can also open this format since around version 4.2).

FFED3D-beta3-Ittiz.7z is recommended as the base pack for new users to download and install over.

If you choose the FFED3D beta1.12++ pack rather than Ittiz's, then I would recommend running the JSGME application that's found within the root FFED3D folder. This can enable / switch between a number of enhanced/replacement models and textures that are not normally active.

Both this site and Elite-Games have an active community/forum board, so please stay a while and say hello/thanks when you download, see what other goodies there are and join in with some of the discussions!

The Russian Elite-Games site has a specific FFED3DAJ discussion thread on its forum with downloads here.

Here at SpaceSimCentral, the individual patch files can be found in the same download location as FFED3D via the Download Terminal file manager, Folder '#-F' \ 'FFED3D'.

The distribution of FFED3DAJ is split into 3 .zip files:

The patch is split like this to save bandwidth for the hosting sites. Once an initial install has been completed, it's typically just the primary "patch" zip file that gets updated between builds. These files should be unzipped into your FFED3D folder, straight over the top of the base installation.

There's a readme file included in the patch .zip "FFED3DAJ_readme.txt" that hopefully explains a lot of the various configuration settings, so please do take a look at that and then edit your ffed3daj.cfg to suit your own requirements / preference!

There are 3 executables included to play this updated version of the game:

FFED3DAJ.exe - This is the classic Frontier: First Encounters game, adapted from JJFFE 2.8 code.

The current release version is v1.11.

Note that this patch requires DirectX 9.0c to be installed. This may not be present on relatively clean systems that doesn't have other games installed. If it is missing then running the game will typically display an error message that it can't find d3dx9_42.dll.

If this error message is displayed, the "DirectX End-User Runtimes (June 2010)" will need to be downloaded and installed from:  https://www.microsoft.com/en-us/download/details.aspx?id=8109

There is also a work-in-progress beta build which is currently v1.16 beta1 and a build can be found here.

Note: beta builds do not contain a complete set of required files for this patch - First time users must add the beta file over a full setup that has had the latest release of FFED3DAJ applied to it. (patch & core files)

As always, a very big thanks to Steve of FrontierAstro for all of the time that he's spent over the years, testing the never-ending beta builds and for feeding back both bugs and suggestions to help get the version to where it's at today. (And also for supplying a few of the new loading-screen 'hints'!)

To get the best visuals from the latest builds of FFED3DAJ, I recommend that you add the following texture packs by nanite2000.
These were created in collaboration and to accompany the release of v1.10a. They will continue to be compatible with future versions.

They are available here at SpaceSimCentral from the Download Terminal, Folder '#-F' \ 'FFED3D'

Please do post in this thread if any help is required or to leave any feedback! 🙂 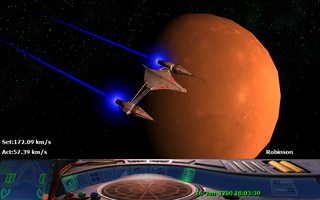 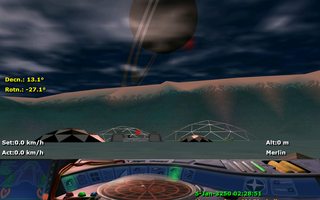 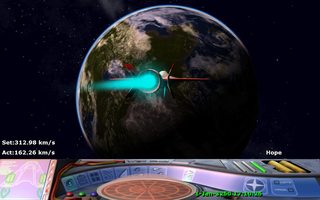 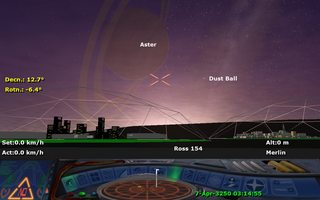 And pettytyrant101 has posted this little video for your viewing pleasure:
"FFED3DAJ- Elite Frontier: First Encounters- see the galaxy for less than 3 Altarian dollars a day!"

If for some reason you have issues uploading files to download area just let me know AndyJ and I can put them there for you. Or if you think we need to clean up the FFED3D file area we can do that too to help limit confusion for people. Been a long time since I last played with FFED3D and I will admit I haven't tried your work yet, I should make some time 😉

But very nice work and an excellent explanation on how you get it all working.

Hi Andy
Even though FFE3D has been around for years now, it's still impresses me. I will never forget, way back in the days before Elite Dangerous came out, this turned up on the Frontier Forum. I was blown away. Then Steve "Coolhand" Tyler, posted a picture of this stunning Police Viper. I thought it was just a nice render. When I found out I could actually fly it in FFE3D.........well, all I can say it's been on my hard drive ever since! 😀

great write up Andyj, any know issues with Windows 10.

great write up Andyj, any know issues with Windows 10.

However if a system is fairly clean and doesn't have any older games installed already, a potential issue would be an absence of the DirectX 9.0.c runtimes that FFED3DAJ requires. If this is the case, then running the game will typically display an error message that it can't find d3dx9_42.dll.

If this error message is displayed, the "DirectX End-User Runtimes (June 2010)" will need to be downloaded and installed from - https://www.microsoft.com/en-us/download/details.aspx?id=8109

This dependency is covered in the readme, but I'll add it to the instructions above too.

Oh, and be sure to add the v1.15 beta7 files after setting up a base FFED3D & v1.11 - it has a couple of years worth of fixes & enhancements over the last release version(!) and there have been A LOT of improvements for things like borderless fullscreen mode, enhanced joystick support, memory usage etc.

Hot off the press... a new beta build, v1.16 beta 1 has been uploaded here. (VirusTotal report here)
This beta must be added over an existing setup that is running FFED3DAJ v1.11 or higher.

This build contains a new configuration application ffed3daj_config.exe to help users set up their preferences and controls without having to manually edit the ffed3daj.cfg file. 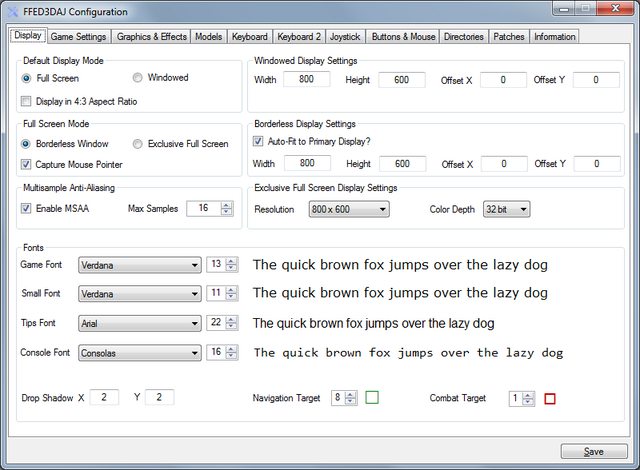 Existing players with previous beta builds, please be aware that there has been a change to the binding of dev scripts to keys.
Previously, they were defined at the end of the Keyboard mappings section, against pairs of keys in the format "script_key1=" and "script_cmd1=".
These are now stored in their own [SCRIPTS] section with a primary key named "script1=" which has the filename assigned against it (without ! prefix or .txt extension) and a second entry "script1_key=" which can optionally have a keyboard key name assigned to it.
To convert existing entries in the keyboard mappings prior to running the configuration application, edit the .cfg file and insert the line "[SCRIPTS]" before them and rename the entries as appropriate.
A list of scripts can added in this section, and these are now assigned to Joystick (and also Mouse) buttons by specifying the name of the entry, e.g. "script5" rather than the filename.