Skip to content
Forums
Station Hull
General Chat
What part of the wo...

[Sticky] What part of the world or universe to you hail from?

I am from New Hampshire, USA

I am from Novo Hamburgo, Rio Grande do Sul state, Brazil.

Its a 260k city, part of the metro area of Porto Alegre, which is the state capital. (Porto Alegre proper is 1.3 million, and its metro is 4.2 million)

here it is at GoogleMaps. Zoom out to see its location in Brazil.

here is a panoramic of my city... shot by me... click for a larger image

and here some photos of Porto Alegre, just 40km away. Have you guys heard about it? I guess not 🙂

I will have to visit Brazil sometime 🙂

come to southern Brazil in july/august, and bring only your bermudas and t-shirts! After all, its tropical here, right?

dont worry, it doesnt get much colder than that. 😉

ps: your state is beautiful! But hey, not fair! I posted city pics! 😀

🙂 We have a lot of small towns nothing really to look at guess that's why we have the lowest crime rate in the nation. That I think is beginning to change because a lot of bad elements are moving into the state from other states and crime is going up a bit.

In July/August what is the avg temp in Brazil AcesHigh? Here in NH it will avg 75-85.

you mean the average temperature in my state/city, right? I mean... Brazil extends from the 5º north to 33º south.

at sea level, the state is located at a battle between cold fronts from southern Argentina and warm fronts from northern Brazil. Thus, while the temperature in the winter will usually range between 10º night to 18º mid afternoon, it can easily drop to around -2º at night and don't go over 10º during the day. But in a FEW days of winter, warm fronts from the north can get some space and temperatures can reach 25º at day, for a couple of days in a row before falling again.

Of course, this at sea level. In towns a bit higher (800 meters above sea level is enough) its already quite colder in the winter, and is snowfall at least once a year is the norm.

hey Darkone, do you know SÃo Paulo? Although its the biggest Brazilian city, its not THAT known to many foreigners.

Check out this video (landing in SÃo Paulo)

Wow. I have never seen so mant high buildings in one place 🙂 Or least that video made it look that way. NH only has like 1.3mil people in the entire state and that's mostly in the southern part the northern part isn't really populated.

Sao Paulo looked familiar to me when you wrote it but besides that never heard of it. I need to get these kids out of the house so I can travel more.

The only reason I can think off as to why a town would be here is that otherwise there would be a county without a single reasonably sized population centre.

I live in a large town in the middle of nowhere.

There is one great thing about living here though if and when nukes rain from the skies this largeish town will be almost completly forgotten and respectable a distance from any perspective targets.

There is one great thing about living here though if and when nukes rain from the skies this largeish town will be almost completly forgotten and respectable a distance from any perspective targets.

Hope that never happens in my lifetime but you need to live at least 100mi away from an impact to be generally safe from the initial impact. You need to be further to not be taking in too many rads. Crap we need to get the space program going and make some settlements on other planets 🙂

DarkOne
(@sscadmin)
Supreme Dark Emperor Admin
Joined: 3 years ago
Posts: 6938
May 27, 2009 7:36 pm
Lecktor wrote:
Hello all, I live in Alabama, USA. Huntsville to be exact, home of Marshall Space Flight Center and Space Camp. I enjoy being in the area that had a great impact on the development of NASA and the the US space program. Apollo specifically.

I didn't know that Space Camp was in Alabama... 🙂 Welcome Lecktor

From the look of this picture the photographer must have frozen his balls off; when every downtown building is smoking like that it means that temperatures are WAAAAAAAY below zero. FYI, you know it's damn cold when you've actually experienced the magic -40, where Farenheit and Celsius are exactly the same. It is 8C this morning... pretty chilly for the 1st of June !!!

I know it gets cold in NH but Quebec has us beat. That is a nice pic with the snow and buildings. I have been wanting to take the wife up to Canada but haven't been back since they now require passports. I have to go get some made now. -40 😯 I haven't witnessed that myself, I think my car would cease to live at that temp.

Yeah, some cars just refuse to start, and Murphy being who he is, it always happens when you absolutely need it!

I've seen a bit on TV on one of those awfully cold days where a guy would hold a bucket full of hot water, throw it in the air, and he'd get instant snow. Only on very balmy martian days though 😀

Getting nice in VA yet? It seems like it has been raining for 3 wks in NH. I really need to move.

Minsk(capital, pop about 1.9 million), Belarus. It used to be a part of USSR.

We have a team of QA people in Belarus for my job. Hope to get over there sometime and see Minsk. Got to be a way I can do some 'training' over there 🙂

I'm from montreal too, here a cool photo from the entry of my home in december:

I am from Germany, Europe. Exact location: Osterode, a small town near the Harz mountains.

Never got to make to Greece when I was stationed in Germany, maybe someday when the kids are out the house. Like in my first post the leaves are starting to change here and if I have the time next week, i'll do some hiking up a mountain and take a pic of two 🙂

Cooooooool. I love that we're from all over the Earth. 😎

I hail from Aberdeen, Scotland, (UK). The UK bit is in brackets because while Scotland is technically part of the socio-political entity known as the 'United Kingdom' we expend significant energies trying hard to ignore that fact. Heh. 😀

For all you Canadians...I am TOTALLY jealous that you live there. I'd happily deal with 40 degrees below and house-high snow drifts!

No snow in Scotland? I thought it gets cold enough there? Or do you just have damp rainy weather? Trust me when you live in snow your whole life it does get old to get many feet of snow every year. 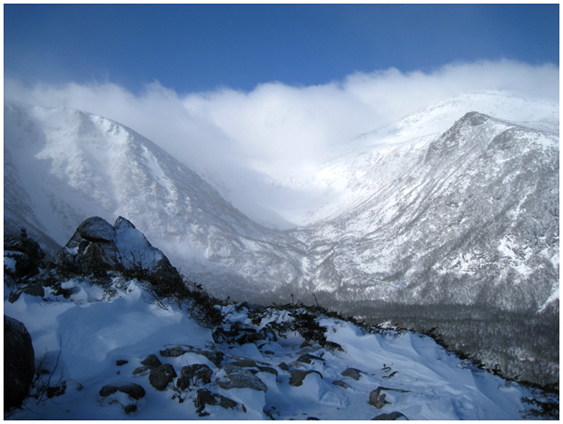 The pic is Tuckermans Ravine in the White Mountains. This is about 2hr drive from my house. That's about a 7mi hike and not sure if i'm able to do that in the winter... COLD!

Never got to make to Greece when I was stationed in Germany, maybe someday when the kids are out the house. Like in my first post the leaves are starting to change here and if I have the time next week, i'll do some hiking up a mountain and take a pic of two 🙂

Same here. Although, I come from Athens, right now I am stationed in Edessa, at the northern part of Greece, Macedonia. I 'll also have to take some photos someday.