I use crypto.com app personally on a daily basis and its great and takes the stress out of learning crypto and the crypto debit cards are great, ask me anything on this. I will probably make a thread discussion crypto soon.

Here is a nice watch of some updates on recent activity on Titan.

I had some UFO experiences and so four friends of mine...experiences very very interesting, not only lights in the sky but real flying saucers.

So i'm pretty sure there is a lot of alien activity in the solar system and on earth. I think they will never come here officially since we change our malevolent way of thinking.

I too had a run in with a UFO when I was kid when I was riding my bike with a friend when I was about 16 or so. The sighting we had even made the local news that next morning that others saw it too. I only wish I had a camera or a cellphone like I have today back then.

Update... omg I did some searching on that event I witnessed and found someone who posted about us 🙂 I could tell the story if someone was interested.

Two friends of mine saw an entire fleet of ufos near a famous italian seaside in the night. The ufos was overing above the water at few meters...then they flyed away on the sky in a moment emitting a strong shockwave that stubbed out his cigarette! The ufos were like metallic disks.

I've spotted some rather odd things in the sky in the past - but nothing I could definitively argue was a UFO.  Plenty of weird stuff just seems to happen around me, however.  Not too sure why that is.

The lad who made the video, has no clue about remote sensing. Some points  from Wikipedia (since I am to lazy to dig in my textbooks!! 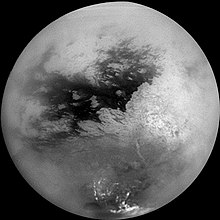 Titan's surface was imaged by looking through the atmosphere in 2004, but some clouds remain visible

Cassini had its first flyby of Saturn's largest moon, Titan, on July 2, 2004, a day after orbit insertion, when it approached to within 339,000 km (211,000 mi) of Titan. Images taken through special filters (able to see through the moon's global haze) showed south polar clouds thought to be composed of methane and surface features with widely differing brightness. On October 27, 2004, the spacecraft executed the first of the 45 planned close flybys of Titan when it passed a mere 1,200 kilometers above the moon. Almost four gigabits of data were collected and transmitted to Earth, including the first radar images of the moon's haze-enshrouded surface. It revealed the surface of Titan (at least the area covered by radar) to be relatively level, with topography reaching no more than about 50 meters in altitude. The flyby provided a remarkable increase in imaging resolution over previous coverage. Images with up to 100 times better resolution were taken and are typical of resolutions planned for subsequent Titan flybys.

Impact of Titan's methane cycle and geology on lake formation[edit]

Models of oscillations in Titan's atmospheric circulation suggest that over the course of a Saturnian year, liquid is transported from the equatorial region to the poles, where it falls as rain. This might account for the equatorial region's relative dryness.[38] According to a computer model developed by researchers at the California Institute of Technology (Caltech),[37] intense rainstorms should occur in normally rainless equatorial areas during Titan's vernal and autumnal equinoxesâ€”enough liquid to carve out the type of channels that Huygens found. The Caltech model also predicts energy from the Sun will evaporate liquid methane from Titan's surface except at the poles, where the relative absence of sunlight makes it easier for liquid methane to accumulate into permanent lakes. The model also apparently explains why there are more lakes in the northern hemisphere. Due to the eccentricity of Saturn's orbit, the northern summer is longer than the southern summer and consequently the rainy season is longer in the north.

However, recent Cassini observations (from 2013) suggest geology may also explain the geographic distribution of the lakes and other surface features. One puzzling feature of Titan is the lack of impact craters at the poles and mid-latitudes, particularly at lower elevations. According to a theory by Catherine Neish,[39] these areas may be wetlands fed by subsurface ethane and methane springs. Any crater created by meteorites is thus quickly subsumed by wet sediment. The presence of underground aquifers could explain another mystery. Titan's atmosphere is full of methane, which according to calculations should react with ultraviolet radiation from the sun to produce liquid ethane. Over time, the moon should have built up an ethane ocean hundreds of meters deep instead of only a handful of polar lakes. The presence of wetlands would suggest that the ethane soaks into the ground, forming a subsurface liquid layer akin togroundwater on Earth. A study led by Olivier Mousis of the University of Franche-ComtÃ© estimates that the formation of materials called clathrates changes the chemical composition of the rainfall runoff that charges the subsurface hydrocarbon "aquifers." This process leads to the formation of reservoirs of propane and ethane that may feed into some rivers and lakes. The chemical transformations taking place underground would affect Titan's surface. Lakes and rivers fed by springs from propane or ethane subsurface reservoirs would show the same kind of composition, whereas those fed by rainfall would be different and contain a significant fraction of methane.[40]

All but 3% of Titan's lakes have been found within a bright unit of terrain covering about 900 kilometers by 1,800 kilometers near the north pole. The lakes found here have very distinctive shapesâ€”rounded complex silhouettes and steep sidesâ€”suggesting deformation of the crust created fissures that could be filled up with liquid. A variety of formation mechanisms have been proposed. The explanations range from the collapse of land after a cryovolcanic eruption to karst terrain, where liquids dissolve soluble ice.[40]

I could tell the story if someone was interested.

Obviously I'm interested too to read your UFO story