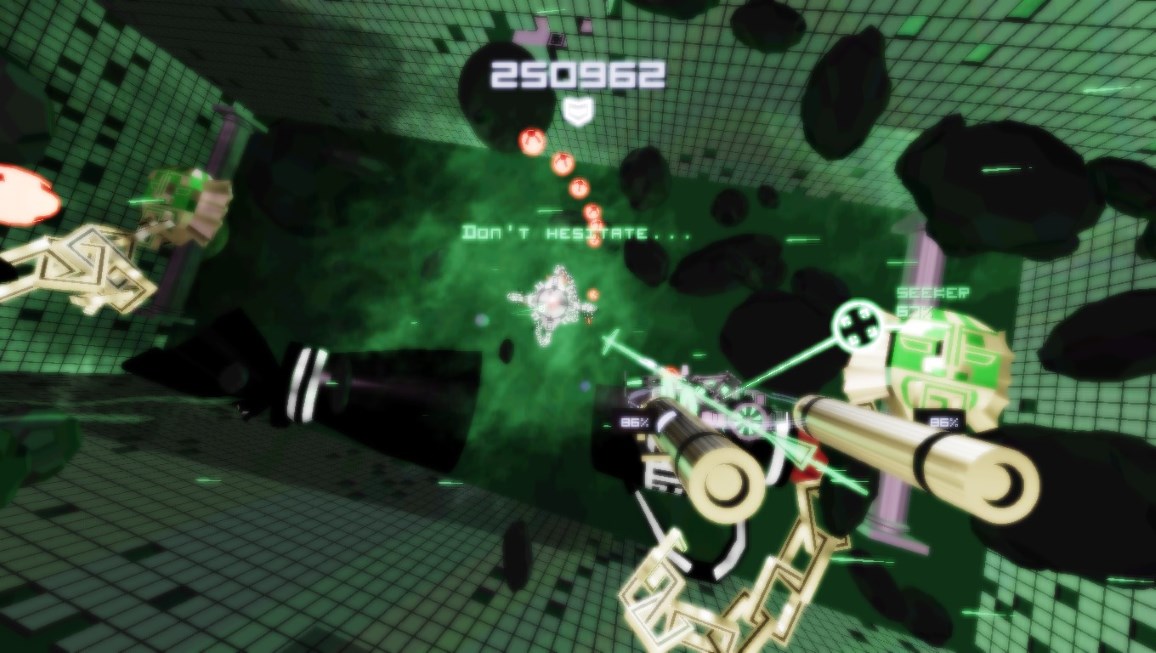 I have been following been following Kromaia’s developer since 2010 and yes it has been a long time coming and a lot of game changes over the years but the small indie development team of Kraken Empire finally has a 1.0 release and it was worth the wait.

So what is Kromaia about?
From what I can gather from both the manual and Kromaia website is that you are a trapped soul that is inside a mechanical unit (a ship). From within this ship you must traverse the multiverse for some answers. You seem to have a voice that gives you information and helps guide you on your journey through the multiverse. I believe the lack of upfront story is intentional by the develoeprs so you can fly around and uncover the story and what you need to do for yourself.

You start each level (which there is currently four of them) having to locate and obtain 20 components to unlock the gate to the next stage/level. But this gate is protected by a boss creature that can be quite challenging.

Your only guide in the game is the waypoint markers on your radar to show you where the next component is. I don’t think the levels are timed, so take your time and discover everything. You will come across puzzles and vaults that need keys to unlock. These vaults could contain special abilities, shield recharges or trophies of some sort, so it’s worth your time.

The enemy elements in the game are easy at first but then they ramp up in difficulty and will give any one a good challenge to complete a level without dying. What makes the game challenging is the weapons and the way the enemy AI comes after you. You only have 3-4 shield points so be careful and don’t get too close. Shields don’t regenerate so you will either need to get extra points form loot drops or don’t get hit.

I preferred playing the Kromaia with the keyboard/mouse combination, I tried my logitech gamepad but I thought it was a lot less accurate to use in this game. The movement and speed of the game is great and I thought it helped set almost a tense feeling to the game because the combat is quick and you have to stay alert for what is around you or you will get hit. Luckily every time you obtain a component your game is saved automatically.

There is also a timed trial/stay alive as long as you can game mode. It gets very challenging, I made it to the first boss fight and just didn’t have enough shield points to make it past.

Kromaia is very interesting game and reminds me a lot of Descent or even a more recent game of Strike Suit Zero with its degree of ship movements. But what Kromaia has on those games is speed and the shear destructibility of objects in the game. The game can be modded as well but I didn’t see many instructions on doing this and I hope some get created, would be nice to add structures and change the game a round a bit because the flight mechanics are great.

Now to some pros/cons of Kromaia:

If there is one thing I could say that describes Kromaia it is unique. This uniqueness has been a great experience and definitely keeps you engaged.

I only saw a few graphical (mainly collision) issues in the game with the AI enemies. Besides that the game played flawlessly for me and I had no problems. Kraken Empire did a great job on Kromaia and I hope I see this game expand and modders build more levels and hopefully build upon the story. Feel free to comment on this post here or in the forum area for Kromaia where Kraken Empire does visit and respond. So give them your feedback and your support because this game is worth a try.