Looks like there is a small group of CCP programmer working in there spare time on this http://community.eveonline.com/news/dev-blogs/eve-vr-an-experiment-in-bringing-virtual-reality-to-the-eve-universe/

CCP have said they don't have any plans to integrate into Eve.

Could be, you never know with CCP.

For a PoC it's really well done. I don't think CCP has made any single player games yet, so my guess this is a MP game for next gen consoles? But nice work showing off Oculus Rift.

Looks like that game they were not working on is a game after all according to RPS http://www.rockpapershotgun.com/2013/08/20/eve-valkyrie-will-probably-sell-a-million-oculus-rifts/

The clips we see are defintely great looking, but hard to tell if its in-gae footage or cgi. I say this because CCP is great at making videos for EVE, but these guys are probably one of the best back drops for space games. This will be a nice title to watch and I hope there is a SP element.

Not much on the web site http://evevalkyrie.com/ be nice if their was a SP game.

Couple of interesting articles have pop up on RPS about Valkyrie first one a play through http://www.rockpapershotgun.com/2013/10/25/impressions-eve-valkyrie/

But it's the other one which is more interesting  http://www.rockpapershotgun.com/2013/10/25/ccp-on-how-valkyrie-will-fuse-with-eve-evolve/ as they they appear to be unsure if the Valkyrie will launch on the PC or if it will goto the console first.

RPS: So EVE and Valkyrie are both PC games, but Dust is â€“ for now, at least â€“ only on PlayStationâ€¦

RPS: Er, oh. But it makes sense to launch on PC, right? I mean, given where itâ€™s at and all â€“ especially with your heavy support of Oculus Rift.

Reid: It technically works on PC, and itâ€™s working fine, but there are other platforms it could run on. Thereâ€™s nothing that technically prevents it from running on a console, for example.

Reid: [laughs] That is incredibly unlikely. I will say that with confidence.

RPS: OK, so you might not launch on PC. But itâ€™s definitely still in the cards, right?

Reid: Wellâ€¦ itâ€™s definitely in the cards. Is it definitely something thatâ€™s there in 2014 on commercial launch day? I couldnâ€™t answer that for you yet. We certainly could do it, but itâ€™s still a question of whether we will.

Looks like Star Citizen may may be causing some panic over at CCP.

TBH, the gameplay doesn't look very special. I'd say it's probably in the league of space sims such as DarkStar One, so pretty good, but I think the only reasons they're so reluctant to say if it'll come to PC or not, is because they lack confidence in their product and now they're waiting for Star Citizen gameplay to show up in order to have a basis for evaluation to be able to decide if their game looks inferior or not. If it does, it won't come to PC. Again, just my opinion.

That could well be the case as Eve has pretty much had the last decade without much competition from any other online games but now Star Citizen has thrown a spanner in the works by announcing pretty much everything that CCP may have been thinking about adding to Eve.

Bit of news about Valkyrie, it's going to be a launch title for Oculus. http://www.oculusvr.com/blog/eve-valkyrie-open-source-hardware-and-the-best-practices-guide/

First, weâ€™re thrilled to announce that the first Oculus co-publishing project is none other than EVE: Valkyrie, making Valkyrie an exclusive Oculus Rift launch title.

EVE: Valkyrie, developed by the team at CCP Games (creators of EVE Online and DUST 514), is one of the first AAA games designed exclusively for the Rift. The project, initially called â€œEVE-VRâ€, was born from a small, passionate team within CCP who supported Oculus during the Kickstarter campaign.

Since its debut at EVE Fanfest last year, Valkyrie has been a brilliant showcase for the power of VR and hands-down one of our favorite Rift games. At E3 2013, Valkyrie came away with a half-dozen awards including Best Game of E3 from PC Gamer and Most Innovative Game from IGN. Valkyrie was also a key part of the award-winning Crystal Cove demos at CES this year.

â€œWe strongly believe the best VR experiences are going to be the ones built from the ground up for VR, and weâ€™ve kept that in mind whilst developing Valkyrie.

We wanted people to really feel like they were there â€“ to sense the vastness of space, feel the confined area of the cockpit and get that adrenaline rush as you see an exploding fighter whizz past your head.

In a very short amount of time this passion project became a full fledged CCP project which weâ€™re now working on in Newcastle. Itâ€™s hard to believe how far weâ€™ve come in a year!â€

We couldnâ€™t be more excited for the future of Valkyrie, and weâ€™re thrilled to help CCP bring the best possible made-for-VR experience to the Rift.

Weâ€™re looking for more great developers to partner with on made-for-VR content. If youâ€™re interested in potentially teaming up, email us at publishing@oculusvr.com to learn more!

Sony has announced its VR headset, called Project Morpheus, at the Game Developers Conference in San Francisco, but one of the larger surprises in the evening was the fact that the CCP-developed, and Oculus co-published title EVE Valkyrie would be playable on the hardware.

It's rare to see a game published by one platform holder be used in the marketing of another, but it seems as if Oculus' publishing deal was only for the PC.

EVE: Valkyrie is a multiplayer action game that exists in the universe of EVE Online. It was designed specifically for virtual reality, and has often been shown on different versions of the Oculus Rift hardware. Sony's confirmation of Project Morpheus follows months of rumors, and the company announced that the hardware will be playable at GDC.

We'll have more Oculus and Project Morpheus news from GDC throughout the week.

And a new trailer from the GDC.

Katee fraking Sackhoff will be part of the voice talent for Valkyrie.

Also a few bits on the game play as reported by the Massively site http://massively.joystiq.com/2014/05/01/eve-valkyrie-will-star-katee-sackhoff-gameplay-revealed/ 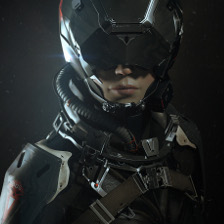 In addition to giving attendees some hands-on time with the latest build of Valkyrie, CCP revealed further details on the gameplay. Each mission starts with your fighter squad being launched out of a supercarrier's launch tube into a battlefield, with direct-fire machine guns and auto-targeting missiles at their disposal. Ships can also have electronic countermeasures to jam missiles and a holographic projector to confuse the human opponent. The battlefield itself will feature different tactical environments, such as dust clouds, asteroid fields, and shipwrecks.

Players will be able to select from a variety of different ship hulls to fulfill different roles, with small fighters and heavily armoured assault roles. Ships can be customised further with different loadouts, and visually customised with decals applied to the hull. It'll be possible to switch ships and loadouts in the middle of the match between deaths to react to the tactical situation on the battlefield. The game will also feature a skill system to allow players to specialise in one particular role.

What the hell is it with trails in these game, seems to be every game dev is putting them in now.

CCP sure can make some epic sized ships, those were awesome and that was a sweet battle and loved the VR aspect of the video and looked extremely stressful and fun to play 🙂

Thing that I think is funny about the video is they state that its pre-alpha footage.... game looks done. Can't wait to see some beta footage if this is just alpha. And the sound and voices sounded great (good job Katie!).

Thing that I think is funny about the video is they state that its pre-alpha footage.... game looks done. Can't wait to see some beta footage if this is just alpha. And the sound and voices sounded great (good job Katie!).

Good point that, CCP have a habit of making EVE look entirely different to the way it actually plays.

Good article on RPS  http://www.rockpapershotgun.com/2015/04/17/eve-valkyrie-moba/ chatting with the lead producer of the game.

No surprise about this bit.

"There are no plans for a single player campaign."

And looks like it will coming out first on PC.

"Valkyrie will launch exclusively on Oculus Rift on PC (although CCP arenâ€™t ruling out other platforms in the future). That means thereâ€™s no launch date set at the moment. I ask whether itâ€™s harder to work on the game and all of these different elements when thereâ€™s no definitive release timeline."

Not having some sort of SP element in games is dumb. MP only games is only going to keep me entertained for so long, especially if you don't have any real progression or if they cash store the game to death.

I think it's a great move.  Playing a game where there are other player presences is very different from a single-player experience; for a space combat game I've always felt the former is a better direction.  I understand it's a different approach, and that people have different tastes.

Don't get me wrong, I don't dislike multiplayer. MP only games tend to not have that long of a lifespan and when the servers get shutdown you can never play the game again. That's why I like for there to be a single player game option because not all devs make a multiplayer game where players can host or open source the game when it is EOL for them.

Looks like a Babylon5 style cockpit where you stand up 😎

Looks cool.  Of course you can never get the real feel of the Oculus Rift from a video.  I just hope the flight engine is better than E:D.  What a waste of money that was.

I read some where the game will only be playable with a Oculus.