Skip to content
Forums
The Great Beyond
PC and Console Gami...
A game for older co...

A game for older computers

Can anyone recommend an old/low resource game?

I want to get my brother a FPS game for his pc, but it's old and can't play the newer ones.

He keeps it updated and maintained, so he doesn't feel much pressure to buy a new one.

What about Return to Castle Wolfenstien or Hidden and Dangerous I or II (believe I is free now). You could try the SW Dark Forces or the Star Trek Elite Force I or II.

Have you tried any emulators? I.e. an NES or Amiga one? I can't vouch for legality, but they sure are fun!

Which reminds me! System shock 2 is a fantastic sci-fi shooter. Came out like... '91? Get it at the Underdogs abandonware site.

Rith
(@rith)
Senior Chief Registered
Joined: 12 years ago
Posts: 62
Topic starter December 12, 2010 18:33
Darkone wrote:
What about Return to Castle Wolfenstien or Hidden and Dangerous I or II (believe I is free now). You could try the SW Dark Forces or the Star Trek Elite Force I or II.

I forgot to mention that we own the Dark Forces 2, and he's played it so much that he's memorized the secret locations on the first level, where you "chase" 8t88. 😆

I'm downloading Hidden and dangerous and I'll be sure to look into Return to Castle Wolfenstien and System Shock 2 when I have more time. Thanks again for the suggestions.

if he's into RPG then TES3:Morrowind and Mass Effect <-- that's a semi shooter.

Far Cry if his PC can hack it, should run fine I think. I think this is one of yer best bets for FPS games...

get another 512 stick of ram, or even a gig, will probs need to be ddr2, and look for a decent agp card. a few years ago graphics cards changed port to pci-express. The best agp cards have about 512 onboard and are about gforce6/radeon 9500 series i think. You used to be able to (havnt checked recently)pick em up for about ÃƒÆ’Ã¢â‚¬Å¡Ãƒâ€šÃ‚Â£30-40 so $50-70ish

I'm planning to do this whenever he gets around to getting a new computer. I've found 1GB DDR2 sticks and some 1GB graphics cards I can get cheaply from a website I'm not really sure I can name. I haven't bought anything yet, I still have to find his motherboard's model to find the right version of the parts I've found to begin with.

Hellgate: London (It works on my Intel 915GM integrated card but at lowest settings, and it is still laggy)

Elderscroll: Oblivion (I can get it to run using Oldblivion emulator)

SW: Jedi Knight - Jedi.... Outcast? We have it for the game cube. We beat it a while back. It's nice, but not much replay value for us. SW: Jedi Knight - Jedi Academy I have this from steam. I showed it to him but he didn't seem too impressed. Hellgate I just watched some videos of it, it seems a bit more fantasy based then I could see him playing.

Oblivion It think he might like it but I'm not sure we could get Oldblivion to work. I just have to ask, if Oldblivion's creators can make it work on older machines, why couldn't Bethesda? Is it a corporation fueled push to get people to buy new machines with Win7+ (they're currently working on 8 and 9 together)? 😆 Hexen 2 The review I read said that you had to find every secret area before continuing into the next. I can say that almost anything even close to this would near kill it for him.

if he's into RPG then TES3:Morrowind and Mass Effect <-- that's a semi shooter.

Far Cry if his PC can hack it, should run fine I think. I think this is one of yer best bets for FPS games...

He's not really into RPGs,though he did beat Diablo 2 thoroughly, with all characters on hardest difficulty. I would say he abhors Masseffect and Halo for a reason I can't seem to remember. 😆 I will look into Farcry, though.

Thanks for the recommendations everyone!

Rith
(@rith)
Senior Chief Registered
Joined: 12 years ago
Posts: 62
Topic starter December 16, 2010 17:23
de5me7 wrote:
it depends on what he considers a doom clone but the following might fit the bill and should work on 64bit graphics

AVP -Gold He has it and he's beaten it with everything except the marine. 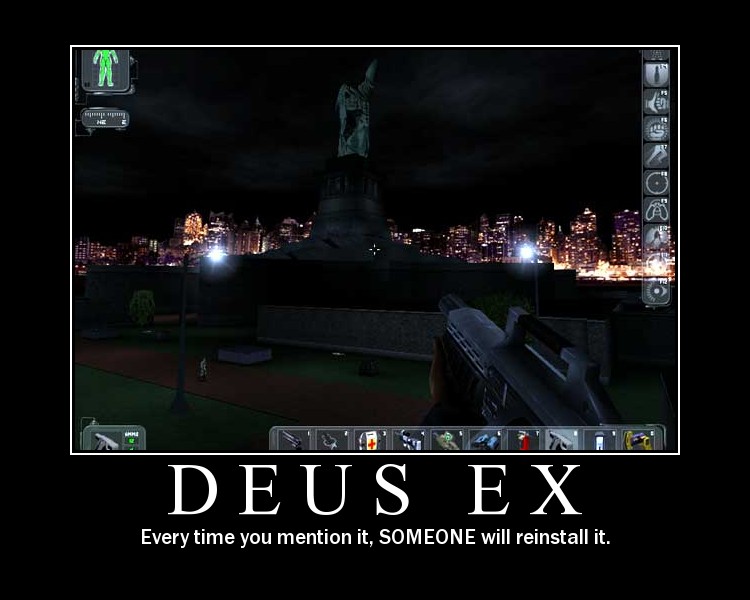 [/hsimg] Yeah, I think he would like this. At least I hope he would. I might buy it for myself instead. 😆

Halflife1Maybe. Does Valve make a hardcopy?

ThiefI found Deadly Shadows, It looks nice I'll have to add this to list, though I'm not quite sure how much he likes stealth games.I might get this one for myself also. 😆

Tribes2 I tried it. it's nice but I don't really see him playing it a lot, as it seems to be multiplayer based.

HL2 His computer meets the recommended specs. I hope I can find a hard copy.

How about Hostile Waters?

He's not really into war FPS's.

Geraldine wrote:
How about Hostile Waters?

Wow that looks awesome... I'll try to get it for his birthday.

I ordered him System Shock 2.

Thanks for the suggestions everyone!

Here's a cool old game Ive been playing: Planescape Torment, its well worth a go although its not Sci-fi.

I like this thread because it reminds us that just because a game is old, dosnt mean it is rubbish. 🙂

Yes lots of great old games mentioned so far and great choice in going for System Shock 2 and Deus Ex, it's very rare for any games to measure up to these two, anyways, here is some more..

Infestation, a game by David (Elite) Braben no less. Note: this game requires an older PC to run. On modern kit it is unplayable and believe me I have tried! 🙁 Really wish Frontier or someone would patch this gem for modern machines. Info here, http://www.frontier.co.uk/games/older/infestation/

Terra Nova (an old Mech Assault type game by Looking Glass of System Shock and Thief fame) which plays very nicely, might be tricky to find though..... Here is some info http://en.wikipedia.org/wiki/Strike_Force_Centauri

And finally Amiga Forever, not a game but an emulator which will allow you to play a host of Amiga greats, eg Cannon Fodder, Deluxe Galaga AGA, Zee Wolf, just to name a few 😉

+1 vote for Dues Ex, what a great game for it's time, plus I think they've just released some sort of platinum or gold edition which includes multi-player!

Also, The original Duke Nukem 3D was a favorite of mine, played it all the time and even created some of my own custom levels.

Yup, Duke is alive and well on my hard drive too 😉

More games to consider is Doom 1, Doom 2, Final Doom: The Plutonia Experiment, Final Doom: Evilution, Heretic, Hexen and Hexen Deathkings. Although the standard games are fine, you can give them all a "Quake like" graphics conversion with proper mouse look by way of using the wads with Doomsday Kickstart. If you have an old copy of any of these games, try it, here is a link http://doomsday-kickstart.software.informer.com/

Sorry I haven't checked this in a while. I thought I remembered saying that I had bought System Shock Two.

Well, er...yes you did Rith and well done for picking one of the greatest games ever made 🙂 . However, when you get a bunch of "seasoned" gamers together, it's difficult to stop those great gaming memories flooding back. 😳

Still, I hope you can see that there is a massive choice out there for people with older setups.

Stardreamer
(@stardreamer)
Warrant Officer Registered
Joined: 13 years ago
Posts: 204
January 8, 2011 04:05
Geraldine wrote:
However, when you get a bunch of "seasoned" gamers together, it's difficult to stop those great gaming memories flooding back.

You mean "old" don't you, Geraldine. 😀 And yes, we're like WWII War Veterans in that sense. Any excuse to relive our 8 and 16-bit glory days! 😆

Frontier still gives me the same buzz as it did the first time I fired it up in 93. 🙂

Rith
(@rith)
Senior Chief Registered
Joined: 12 years ago
Posts: 62
Topic starter January 20, 2011 10:20
Geraldine wrote:
Well, er...yes you did Rith and well done for picking one of the greatest games ever made 🙂 . However, when you get a bunch of "seasoned" gamers together, it's difficult to stop those great gaming memories flooding back. 😳

Still, I hope you can see that there is a massive choice out there for people with older setups.

I find it encouraging, and I agree with you. I hope when I'm more "seasoned" someone will start another nostalgic thread I'll be able to participate in. 😆 A lot of the current classics were before I really got into games.