I really enjoy the game but the face generation looks pretty horrid and there is a specific look I am trying to achieve but find almost impossible using the automatic system. Is there an option to manually put together my face and I am just missing it? or is there a mod that would let me do that?

True, the facegen is an abomination.
We intend to rip it out and redo from the ground up, There were several starts, but all people dwindled away soon, who were working on it. It's cursed. 🙂
I have some sketches for it, but didn't yet had the time to actually start working on the replacement. But don't hold your breath, it's a lot of work.

I hope you don't mind i i give a comment to this. I like it, i like the work and the general idea behind. Now whatever you folks see in Pioneer, once it was our intention to be simply a FE2 clone and even the way of cluttering the faces together was similar to the original and we found it's good (besides i like the fun aspect of it, but not everybody is like me, not everybody is as funny like me). In the very beginning we had an empty screen and before we started with implementing the face generation i would have liked to done it with a model. One could specify bones for a head and it could be build procedurally and it would even offer to animate the stuff.

But yeah it's a whole lot of work and this task i couldn't have started myself.
However, changes overall have made such impossible.

but i can reach it with a dynamic geometry which allows me to move any specified vertice in the model.
If that is scripted geometry or a skinned matrix.

In principles it wouldn't be different to what i.e a blender offers, face generation based on a couple of variables.

if it wouldn't exceed my capabilities somewhat i would have presented it in "Phoenix", maybe i still will do it just to show that it would have been posible before.

FYI, it's possible to change the faces or to make it more serious looking, personally i would prefere drawings if you clutter the images together because this would allow you to fit the elements so they won't look this artificial as they do sometimes.

Another possibility would be to create models, render them and use the result as base for the face elements, also this seems to me a good option if i can't use the models.

It's "easy" it's just a lot of work to make all the face elements.
Besides it's not longer my job.
Do it yourself folks and don't fear the work - personally i do it because it gives me work.
But well, i lost reputation and it isn't funny to work without to be honored or even worse to be blamed for.

Don't forget "the future will be intellivisionised" - use procedural generation wherever it's possible.

Procedural generated Models?
Why not, we thought about such a long time ago.
But well it needs a flexible model system to reach this.
And not something which is ment for architecture and web presentations.

I can "easy" generate a scripted geometry - can you do such with collada?
(you could clutter them together procedurally but you can't generate geometry)

Unbound to this, right yesterday i had the idea to generate trees, just to place them in my Arcology.
It will be my first approach to generate geometry.
Once i would pass more variables to the model system it would be even possible to make them different for almost each generated system.

In this sense "have a plastic aorta - it will give you a new perspective to life"
(things lose of importance due to such).

in other words
have pun - i'm happy to stay alive!

I don't know, I always thought the ugly faces you sometimes met on the boards were a charming feature, as Scott Manley said in this review video of Pioneer

I understand why some would like it and others would not. Sadly I am of the latter category. I was not exactly around in the early days so I suppose I simply cant appreciate the intent behind such a feature to the same degree as someone who witnessed this kind of thing developing. I actually was wondering if its possible to disable the face generation for the player specifically or all together? I wouldnt mind the facegen if I didnt need to look at it. Out of sight out of mind lol.

Funny thing, A little bit ago I found a mod by I believe the user hergot that has fixed the issue for me! (I know it shouldnt be an issue to begin with but I am super OCD about stupid crap like weird faces) It replaces the facegen assets with pre-made character portraits instead, many of which look really nice. So with that in mind, while I would at some point like to see the ability to make better faces manually or to disable it completely I will just use this in the meantime lol. If hergot ever sees this, many thanks!

it should be possible to have the "noise screen" back we had at beginning so you would get rid off the "cheesy avatars"
i understand well that some dislike them, i think they are enjoyable but well...

i notice that there seems to be much interest in altering the avatars, the generation itself can stay, it's straight FE2. but instead to use the snippets from photos it would be maybe better to either draw them ore use snippets from generated and rendered faces, certainly this would look more serious and also certain ugly things like borders or not fitting mouth or eyesize is avoidable.

at this point let me know it, maybe we can build a small team and pick up this task.
iv'e read one fiddles around with blenders face generation, that's a good starting point.
what we need as first are a couple of parameters the team members must keep, skin color(s), certain sizes mostly, we would have to try it out.

the renderings would also allow to make better backgrounds as a living room of some sort i.e.
fitting space station backgrounds.

Hope this will be a bit more to your liking... 😉

You'll find them at Weebly, if you look for spacesimpics2 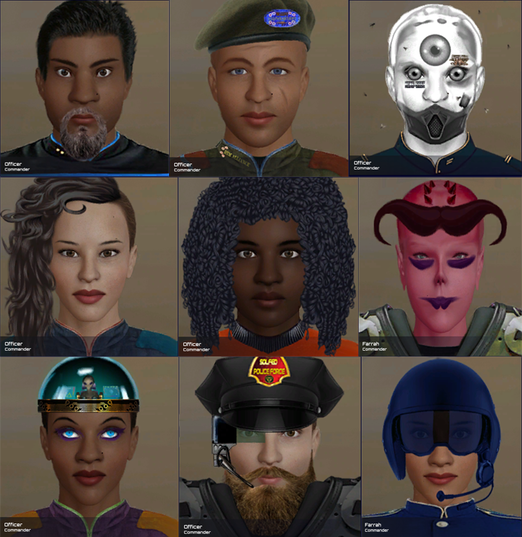 @gernot66 Hi Gernot! It's good to hear from you! I was worried about your absence. I hope your bionic aorta is working well.

Ok, on topic, I haven't actually played the game in quite a while. It won't run for me, but there's another thread on the forum about how to run it in Linux. I'll try out the instructions later.

My dream about how the facegen should work is like what you see in other games like Mass Effect, etc. An animated 3D model that would seem to breathe and blink and mouth the words that it speaks with an audio voice. I realize that it would be a tremendous amount of work that's way over my head, but that's what I'd eventually like to see.

Also, if you want to see what I've been doing, I believe you left off about here.