2020 is finally coming to end, here is hoping that 2021 will be a much better year than this one. Have a wonderful holiday season, stay safe and stay healthy, perfect time of the year to stay inside and play a few video games ;) 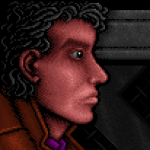 The gentleman known as Acen ("ay-sen") Onyx carries himself in a manner that belies his many years exploring various corners of space, yet has an air of having a rather cautious attitude: while not wearing his shades, you see his eyes observantly taking in everything (and everyone) around him..
.
Now -- aside from being a friendly conversationalist, when he engages with you! -- the only other "reputation" preceding him is borne in his moniker: that he is often dressed mostly in black (& that he looks damned good in it).
.
Indeed, he wears a long (shin-length!), black, heavy (but not a 'trench') coat - a 'Niccolo' befitting his taught 6' frame - which seems opposite of 'reflective' -- its outermost fine material layer appears to absorb light and, while black overall, the coat takes on a very dark blue/gray 'tarnish' when struck by light.. which isn't often, as he manages to keep mostly to the shadows..!
.
Visible from within his coat, his matt black (naturally!) pressure suit shows itself to be of an agile, medium-armoured type; and the tiny blue light on the back of each black gauntlet reveals its built-in powered energy-shielding.
.
While he walks at a slow & steady pace, he is known to be able to move very quickly when situations require (though perhaps not for sustained periods, anymore!), and quietly too, as his boot-steps barely resound nor echo audibly.
.
Closer now, and passing through a pool of light, his raven hair has an azure cast, trimmed over a lightly-tanned brow, balanced nose, & high cheekbones, framing his wide, dark eyes; one corner of his mouth is upturned - a semi-permanent grin of not-full lips above a gentle chin in 5-o'clock shadow...
_
(You see a flash of royal purple: a sort of cravat; and, as he passes, barely see what looks like a fine 'furring' down the middle-2/4ths of the coat's back -- a signature of the remote Ju'bah-tus system's haute fashion house.)
.
In his wake, [a hint of lavender over] bergamot, then galbanum; & vetiver..

'.|3/'  __[q["v"]p]__, '.|2/' ._._ ..__.. _._. '.|1/'  :==8'H'8==:  '.|#
.
Looking back at his ship, its hull ticking slightly as it shrugs off the cold of space in the near bay, it isn't sleek, it isn't shiny; it's nothing special -- in fact, it looks wholly unremarkable.  (In contrast, the snub-nosed fighter in the first bay "looks fast", with its 4 engine pods & sleek wings tipped with weaponry.)
.
Nondescript in its dark green paint (showing gun-metal gray where scratched or worn off), it's little more than a tapered brick with slightly-curved delta-wings, one of whose winglet-tips is missing.  Not too obviously, though, tucked under each forward facing reverse thruster & against each side of the fore-hull, is a weapon barrel, and there's evidence of a turret which would fire over the cockpit.  So, you figure, at least she's an armed brick..!
.
Speaking of the cockpit, it sits high, with the ship's nose tapering down & away from the forward viewport to the top edge of an inverted triangular 'grill' -- presumably housing the primary reverse thruster -- whose sides lead back along the fore-hull to the port & starboard nacelles, each enclosed behind some flanking hull where the wings meet the main body of the craft.
_
There, you can make out its registration: "R-49X", in contrasting light grey.
.
Cross-referencing in-station displays, Bay 3's "R-49X" is the "Dark Phoenix".  Curious, you check Bay 1: "T-65B", strangely named "Incom-X-W"...
.
Looking again at the Dark Phoenix, you spot two outward-leaning near-vertical stabilisers, not too large, each atop the rear hull over the two side thrusters.  You'd not noticed them at first, in the dark, toward the back of the bay, but now you're really looking, you see dark red phoenix outlines stencilled on each.
.