Figured I would come in here and introduce my project.

It's very much alive.

Wayward Terran Frontier was the original project, and it was meant to be a multiplayer cooperative galaxy exploration RPG where players could command a big space ship as a team and explore the galaxy looking for loot and adventure. The first kickstarter didnâ€™t work out, but the team gained an artist through kickstarter so we decided to rebrand  and redesign the project as Wayward Terran Frontier: Zero Falls, a single player space exploration and adventure RPG.

You play as a human captain stranded in an uninhabited star system that happens to be full of conflict and mystery. There was a cancelled terraforming project in this system which has left behind an abandoned yet habitable planet and a lot of infastructure. There are multiple factions which have set up shop in the area for different reasons, for some reason an elite paramilitary organization has been commissioned to protect the abandoned planet, and other groups have moved in to support their efforts and profit off of local resources. Your task, given to you by the AI that woke you up, is to land a ship on the abandoned planet, and it wonâ€™t be easy.

The gameplay centers around an upgradeable space station where the player can use a special matter furnace to convert raw materials into new ships and weapons and equipment. The station also offers a risk-free home base for the player to engage in crafting, farming, and ship design activities between adventures.

Outside the station the player will find a large semi-procedural solar system with asteroid belts, space stations, ice fields, pirate raiders, civilians going about their daily lives, and deadly mercenary forces patrolling for people like you. The game is very open in design with a focus on free exploration. There is a huge amount of space to cover and there are interesting things hidden everywhere for the player to find.

The game engine is completely custom, built on .NET and the XNA framework.

The game is being tested by friends and family. We are preparing a version for press that we hope will be done real soon, if you are interested in a review copy you should register on the store and send us a message with the contact us form: contact us

Check out the media section for more HERE

Interview with Be Indie Now

I didn't get to have my big awkward speech at the beginning of this Kickstarter because we had fancy explosions to show you instead, but I have something even better:

I had a pretty in-depth interview with Tobiah Marks on Be Indie Now Where I talk about everything from the last Kickstarter up to where we are right now and our plans for the project in the immediate future.

Go check it out!

So I became involved with an accidental reddit AMA last night

I figured I would get 1 self promotion post before reddit got angry with me so I wagered that the folk over at reddit.com/r/pcmasterrace would by sympathetic to our plight, and I dropped in for some friendly pandering. Turns out I was right!

Of course, people had questions for me, so I answered...next thing I knew the post had been flagged as AMA and I was answering endless questions about Wayward Terran Frontier: Zero Falls and the engine and the kickstarter etc. It is all very strange, it is still happening right now.

As of right now we have only reached 500 points, but look what reddit already did to my website traffic: 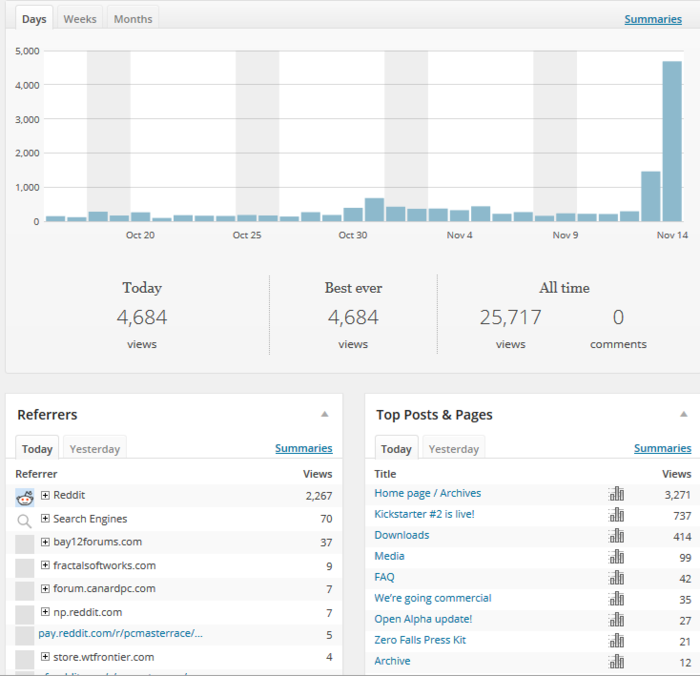 So I suppose I should encourage you all to go participate in the AMA that I suddenly find myself doing. This is fun.

We just made the ship editor a bit more shiny

We have been working overtime trying to get the full single player game to a playable state in time to start giving some copies out to youtubers and streamers, and it is very near ready. The side effect of all that work is upgrades and improvements for the free ship editor. Check out the latest patch notes here:

Or just click the check update button on your launcher.

Don't already have the launcher? Download it here, people have been playing with the full Wayward Terran Frontier: Zero Falls game engine for weeks already in the form of our free ship editor. We push updates to it pretty regularly. Today we added:

One of the small little things in your pics/video that grabbed me was watching a ship get cut in half, that was great. What type of destructive effects do gamers have to look forward to in Wayward?

How is aiming done? I ask because it sounds like you are looking at doing fine percision shots like you said if you hit the bridge just right you could kill the captain and then the fight is over. So are you trusting in your ships systems for this sort of aiming or are you doing a luck type roll to see where your shot lands?

dezgard
(@dezgard)
Petty Officer Registered
Joined: 11 years ago
Posts: 26
Topic starter November 17, 2014 18:18
It is action based combat, bullets go where they are aimed, no random chance. The only AI control is when you let the AI fire the guns for you.
There is no "chance" to hit a sub system or random roll when you shoot part of the ship, every pixel of the outside of the ship maps to a tile on the inside of the ship and therefore a module of some type. What happens when you shoot someone depends on where you hit them so you better aim carefully or use lots of bullets.
There is also the tech demo to try out here go on cut some ships in half 😛
ReplyQuote

Tomorrow evening 11/18 at 7 PM Pacific time I'll be joining a podcast with the guys over at Space Game Junkie. We are going to be playing the dev build of Wayward Terran Frontier: Zero Falls and chatting about...stuff. You should make sure and tune in!

I have received multiple questions about how combat works, usually asking for clarification on how damage and attacks are calculated. I think the primary misunderstanding is the system is more complex than most people intuitively expect. The game we pitched in the trailer and in various bullet point lists says walking inside ships and subsystem based damage. However the only way to properly convey gameplay is through video.

So to clarify things I have recorded a short video in which I hunt down a pirate, disable the ship, board it, and get into a brief fire-fight with the pirate captain.

Also In case you missed it. here is the link to our podcast with Space Game Junkie:

We talked about all sorts of random stuff for hours and even though the game was a bit buggy in its pre-funding state we had enough fun to get carried away until our time ran out.

- How are you getting the captured ship back to your base? Will you have more crew in the game later that you can move over to the ship or can you tow it?

- I take it the zoomed out radar that you showed will show different colored dots depending on your affiliation with the npc's in the sector?

- I take there is different styles of radar that can show bigger distances?

- And will you allow the NPC's to set auto-destruct on a ship your about to board....? maybe a small mini-game there to deactivate or run back on your ship and take off 🙂

- while fighting can you repair your ship systems by going back to the internal view and running over to the guns and fixing them while still engaged?

How are you getting the captured ship back to your base? Will you have more crew in the game later that you can move over to the ship or can you tow it?

I fly it there and park it. This is not meant to be a crew or fleet management game but you will eventually have some NPC crew helping you out.

I take it the zoomed out radar that you showed will show different colored dots depending on your affiliation with the npc's in the sector?

I take there is different styles of radar that can show bigger distances?

Not yet, we have only made about 1/10 of the modules we want to add, various tiers of sensors is on the todo list

And will you allow the NPC's to set auto-destruct on a ship your about to board....? maybe a small mini-game there to deactivate or run back on your ship and take off 🙂

NPC's that auto distruct their ships for sure, however it will be based on the ingame mechanics which means their reactors explode and there may still be portions of the ship you can board afterwards. I know in hollywood ships are simply gone after exploding, but we like them to break into parts

while fighting can you repair your ship systems by going back to the internal view and running over to the guns and fixing them while still engaged?

If you have a crew, and a radio headset you can go to the inside view, give some repair orders, and then get back to the fight. You can also tell the AI to fly while you run around micro-managing the repair tasks. Also there will be items and modules which will provide some limited auto-repair functionality

Congrats Dezgard you made funding! 😀

Thanks! now to push for some of the fancy stretch goals 😛

dezgard
(@dezgard)
Petty Officer Registered
Joined: 11 years ago
Posts: 26
Topic starter December 9, 2014 04:37
Hello There people!
Posting an update on (WTF) and the successful kickstarter campaign!
So far we have reached two stretch goals! And are doing well for funding there has been much updated via comments and posts from the creator including some new posted videos.
Check it out for yourself!
Wayward Website
Kickstarter
ReplyQuote
All forum topics
Previous Topic
Next Topic
Forum Statistics
78 Forums
5,588 Topics
57.8 K Posts
0 Online
4,140 Members