Set of new buildings to either add to or to replace the existing ones.
The above screenshot is from Pioneer displaying the new buildings only.

To avoid questions why i put them on sockets,

Most buildings are 15 m above the ground nonetheless they get buried sometimes.

It's sad that Pioneer uses now a fixed spacing for the buildings measured by the tiny existing ones (or simply disregards the bounding box size). So it's not my fault if they stand one in another, it's an at least useless change (one of the sort which exceeds my understanding)..

As a comparison that's how they look in "phoenix", unfortunately here is the spacing a bit to large and i have to use a smaller collision mesh to reach a senseful spacing (i tried to alter the size for pioneer but it has no effect on the spacing). 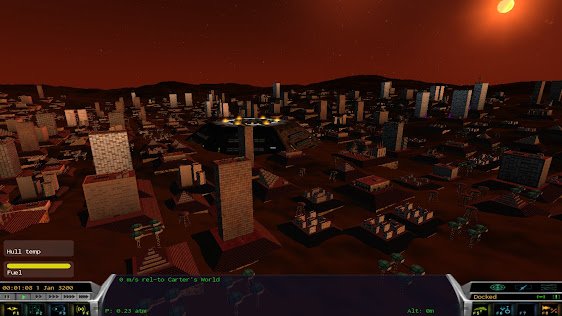 I wasn't little surprised when i noticed that the idle animation channel also works for buildings. But it's a little sad to have no lights on top of the skyscrapers or the factory chimneys (the node is present but "navlight" obviousely doesn't works for buildings). Not really needed but it would be nice.

The following screenshot shoes how it will look if you add the buildings by placing the mod in "documents/pioneer/mods".

Finally the link to the building mod.
mod buildings gernot20190310

If you like to use the buildings without the existing ones, you can zip the existing ones in "..../pioneer/data/models/buildings" and then delete the directories or simply move them into a different dir e.g "pioneer/archive". unfortunately i can't disable them with a dummy file.

No bad, thanks marcel, at least not bad for someone who stated once that he "strongly dislikes skyscrapers".

I still dislike them on "Phobos" (or any other hostile planet or planetoid, the "pink" screenshots are from "tom morton's sanctuary" on "phobos". a quite giant city which covers half of this potatoe, i chose it to show the quite common possibility that the buildings mostly won't be placed on a plain level like on earth.).

I still would like to seperate them for hostile and outdoor worlds.

The "octaeder" (that thing on stilts) and the "colaniegg" (which is inspired by what is really called "colaniegg") are already in a seperate folder, just to show off my intention. it would need some more buildings in this style for a hostile worlds building set.

I know Tom stated once it won't be possible but i still think it is (his point was if i remeber it right that this will be generated when you enter a system and that you could only respect the whole system. but i guess that's thought wrong), you know when you enter the frame of a body and you will know if it's a hostile or outdoor world, you can certainly construct the table new which contains the buildings to draw.

btw, funny someone likes to "introduce" building purposes - as if we wouldn't have had that and as if it wouldn't have been removed for no good, "city building" "city energy" "city starport" we had that and instead to improve it had been removed.
To remove what wasn't a bad thing to control the models via a script, you could still use a more advanced mesh, but i see no point that language "a" is better as "b" if the result is the same. in general collada is a script and it's as clumsy as a script with the main difference that it's just hard to edit this script. it doesn't do something else or different to geometry as a lua script when i load wavefront objects in it and eventually animate them with rot/pos/scale it's exactly the same for collada how we use it. The resulting performance is exactly the same, means i was surprised how well the wavefront version runs in Phoenix, it almost doubles the resulting framerate compared to the scripted geometry, this i didn't expected, i expected some gain but not that much. but since you draw many buildings a small impact will easy become a big one. there isn't much difference between the SGM and LMR versions for Phoenix. In Pioneer they run very well i have to say, it looks like this have been improved much, which is obviousely the no.1 framerate killer, the buildings of a city. you rarely will draw 200 ships at once but easy 200 buildings.

How i miss the "intelligent" spawning of the buildings since this tagging has been removed.

Btw, i used only the binary compiled .sgm models for this there is no need for the rest of files once it's compiled. I would suggest this in general, if one is interested he could still ask for the source. It doesn't makes much sense to have both models in the release, the .model file and respective collada or wavefront objects and the textures OR the .sgm and the textures, but there's no need for both.

I didn't expect that it has an influence to performance, but it's lighter, smaller, that's already an advantage (certainly a binary is easier machine readable even if you won't notice this). As i recognized Pioneer will use only the binary .sgm model if it's present, so there is really no need for the rest.

It has a second benefit even if i don't mind about, your work can't be abused, it's almost as it would be encrypted.

A good is a good and this is good.

Don't be surprised when the models don't appear in the modelviewer, Pioneers "MV" doesn't recognize models which are placed in "documents/pioneer/mods" - unfortunately.

But they work and they even work if you disable the original content.
Pioneer itself recognizes them proper as buildings otherwise it would refuse to run without any buildings.

They do show up in the model viewer. At the end of the list for some reason.

I forgot, but you can even get the modelviewer to open a specific model like this.
pioneer -mv modelname
Where modelname is the name of the model file without extension.

Not sure how old that feature is, but at least 3 or so old builds should know it.

Of course nozmajner thanks for the reply nonetheless.

In general it's the same as for the old lmrmodelviewer.
Perhaps i mixed it up because the old won't show them anyway if not tagged ship or station since the tagging had been removed for the game.
Except of course you call it by its name or start with the models name.

The lmr needs no folders to know if it's a ship station or building it depends on the tagging and you could have all in one skript.
Except yeah for the Buildings since this tagging had been completely removed (for no good imho and now you guys have to find a way to respect that again "city starport", "city building" "city energy" or whatever gives some structure to the cities, certainly the right idea) since its removed only the game respects the tag "city building" but not the lmrmodelviewer.

I certainly mixed that up, yes they show off at end, when placed in the game they are on top.

I guess the hierarchy is usually caused by the directories name i assume, but mods will be last in hierarchy, this is needed so i can overwrite a file with the mod resp. the game respects then the mod and not the original file.

Assumed that still works. I experienced that it seems to be not longer possible the .json stuff prevents from a lot.

And oh imho Pioneer leaks of a proper buildings set, you have only a couple of residentials or they look like residentials to me, i miss anything which looks like industry or commerce.

And before i would think about to give the city a structure i would take care about to split hostile and outdoor architecture, i wish this since aeons.

Also my buildings look stupid on a hostile planet with exception for two which i already placed in a dir "hostile" and the rest in "outdoor" it was ment as a litle hint that this will be good.
The "Colani Egg" and the "Octaeder" are sealed and ment to be placed on hostile worlds, sorta pioneering buildings.
Hostile worlds could contain nothing else as a hostile station (a sealed one like mine) and a couple of domes, this is not only FE2 it's damned very reasonable. I feels it's still horrible if i land on a hostile world on an outdoor landing pad. recently this is randomly and you could only code this hard for Sol (or other systems which are skripted) if you know which seed shows up which station while this can change with the next build.

And it's even more horrible to see skyscrapers on a moon.

I easy can imagine a hostile station which covers a whole city, that would be most reasonable, a bit like moonbase alpha.

clever made it could be procedural generated and show each time a little different layout or combination of the buildings.

Stations else should be more off the center, it's not comprehensible that a starport is in center of a city, poor residents what a horrible noise.

I grew up close to an airbase, it is horrible any airport can't be that noisy.
Back in the '70s when we still used the "Venom" it was like a small earthquake when they started. they could hardly lift on the short runway and was a few feet above the rooftops.

Venom and Vampire was the proper name this fighter made a horrible noise like a banshee (Vampire was simply the version with extra fuel tanks on the wingtips).

Just to imagine how that would be if a 1000 ton spacecraft lifts as long as we have no antigravity.

I guess today they would evacuate the whole area in a range of 100km.

However in midst of the city or close to center is not reasonable.

But that's nitpicking i guess the splitting in outdoor and hostile is what is needed most.

To have a structure like your new teammate suggested is secondary to me, personally i feel it's not that bad without this structing in industrial, residential and commercial zones.

Another thing i like to see solved is the to tight distance of the buildings.
It looks to me like the collision meshs data is bypassed and all buildings have simply the same radius, because the recent buildings are all small the same in footprint and i remeber that it once was debatet to position them closer, the collision meshs radius which is the average radius i assume spaces the buildings to far if they are very high and rather "thin". But it's a bit stupid from my pov to use a fixed radius as if those buildiungs which i truely never liked to much can't change or would be the last and best one can imagine.

It simply prevents from properly adding different buildings and they will look wrong if they haven't the same footprint.

But hey, i still can do that myself i just have to kick my ass 🙂