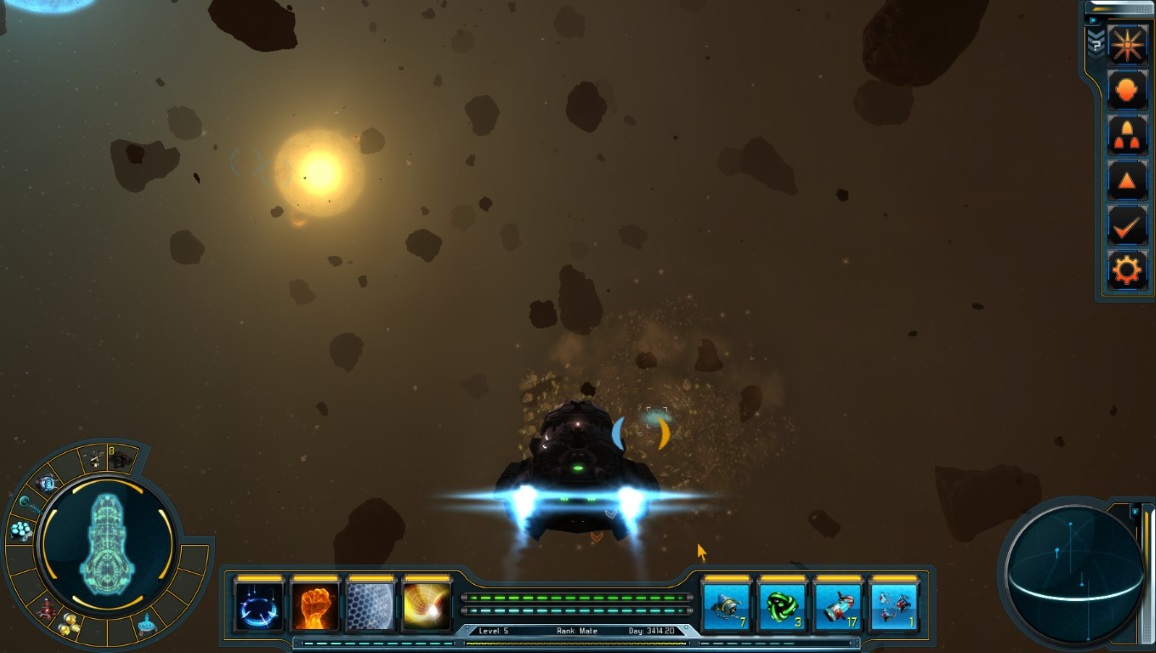 I have been following Starpoint Gemini series for some time now and did a review a few years back on SPG1. Both games are distributed by Iceberg Interactive. LGM Games has been focused on their series and you can see that LGM really took a lot of the player feedback and evolved the SPG2 into a very large open world game.

So what is Starpoint Gemini 2 about?

It has been two years since the end of the second Gemini war, the situation in the war-torn system is further from resolution than ever. The collection of freedom fighters named Gemini League is now reduced to a small group, with no power or influence, after losing their leaders. The Empire meanwhile, has used the re-opened Starpoint to occupy the once renegade Gemini sector – and beyond.

A multitude of Imperial warship fleets and mammoth motherships have crushed every trace of opposition. The situation was looking bleak, when they suddenly halted their armada and re-shifted their focus on fortifying Starpoint with staggering numbers. Rumors soon spread that they were afraid of something coming after them through the T-gate, from what was supposed to be the core of the Empire. What are they running from that makes even the mighty Empire tremble?

So with knowing this, you set out as a Capt. Adrian Faulkner in Gemini’s open world concept and free roaming game to unlock these rumors and secrets.

You start the game and a tutorial will help you through the first encounters and navigation while you accomplish your first mission. First thing you will notice over SPG1 is that movement axis, you now can move on X and Y axis. Combat is generally the same from the first game with some improvements. The boarding and ship capture component has been improved upon and can be difficult at times because other ships could be attacking or possibly destroy the ship your trying to capture (Note: LGM did recently patch an issue with this and I haven’t tested this out yet). Your galaxy map is a great resource and is constantly updating and it is also hooked into your reputation so it should show factions that are not on your good side. But all of your missions will show up on the map.

Best thing is the fact that there is no more load screens that I have seen, yeah there is the worm holes but they don’t count since they pop you out at different locations. But you can go from one end to the other with just your engines (may take a while) but you can do it. There is a lot of interesting equipment items and I haven’t seen all the ships yet in game. Though I do find it odd for you to run into a lvl7 npc that has a ship that costs millions or tens of millions of credits when compared to my ship.

There is two modes free play and campaign mode. I am playing campaign mode for this review, but you are not limited in playing the game at all. You can still treat the campaign mode like the free play mode. I have been taking my time and doing asteroid (love the Borehole torpedo) and gas mining. Only thing I don’t like so far that I was able to do in the first game was send crew over to search a derelict ship, now I have to use nanobots to do it and it gets a bit expansive and you cannot always find them at the stations.

The visuals and the music has been improved greatly over SPG1. Some people had issues with the voices from SPG1 (not me) but the voices in SPG2 so far have been good. I have noticed that combat sometimes drowns out the dialog sometimes and you will have to read the screen. Would have been nice for the game to lower the combat sounds while this dialog is being played.

Hacking has taken a larger role in the game as well and you can do a lot more of it and get some rewards (ie: xp and loot), but depending on what you do this on you could get attacked. So watch it.

Now to some gameplay thoughts both pros/cons:

LGM has done an excellent job with their sequel to SPG2 and the game has been getting some really nice user comments. It just shows that when developers listen to their player base that if they can deliver on some of those suggestions that a game will do well and surpass its previous work. LGM has a task now on how to improve upon SPG universe? Which they may not need to do depending on what can be accomplished in mods. Would like to see more player created structures in the game like stations, turrets and mining rigs. I will definitely keep playing SPG2 to complete this campaign and to see how big of a fleet I can amass and wreck havoc on everything that I can and I want to play the pirate role as well. I know you will get many hours and pleasure from playing SPG2 and with LGM patching the game on a consistent basis it only gets better. I am unsure if any DLC will be created, there was some for SPG1 so it is highly possible. So pick it up and enjoy it and do let us know what you think in the SPG2 area of the forums.

So where does Starpoint Gemini rank?
I would have to say 90% out of a 100%. Would give 100% if the developers add a SSC faction to the game and give us a station at the far edges of gemini space.

Do checkout the gameplay video below it will give you an idea of the gameplay in store for you in Starpoint Gemini 2: