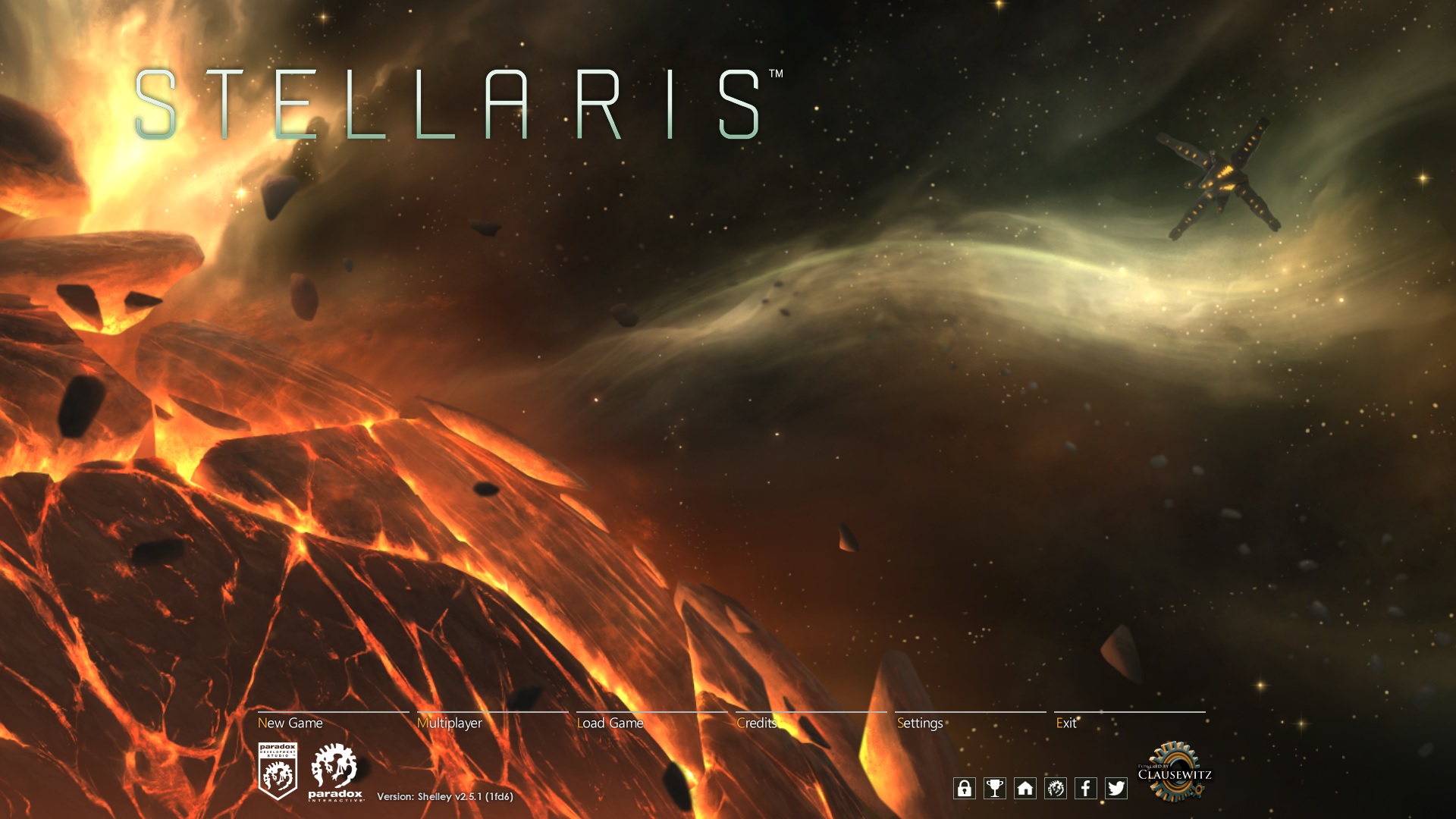 What is it? For a game that was released almost four years ago, and for which enough has been written to compile several novels, I’m still trying to figure out exactly what Stellaris by Paradox Interactive is suppose to be. Is it a 4X? Yes, at least it is for the early part of the game… Is it a sim? Well kind of, sort of, but not in the sense we come to expect from a true space sim. Is it a strategy game? I guess at some point it is, or rather it attempts to become one after it stops being a 4X.

In true 4X fashion the game begins by confronting the player with a number of choices. Everything from your faction, the size of the galaxy, number of AI Empires, etc. is yours to customize as you see fit. Oddly enough though, once the novelty wore off, I found myself gravitating more and more to default settings and races as the pacing and overall experience seemed sweeter that way.

The game itself is beautiful, there is no denying that, and a player starts at their home system in standard 4X fashion ready to explore the void. And let’s be honest, this early part of the game is exceptionally well done and has you feeling like Jean-Luc Picard as you discover all the hidden goodies that are nearby. Anomalies abound galore and if you get really lucky, you just might find an intact ship or suitable world to colonize. Eventually however, that exploration phase will end as you will run into other empires and find yourself boxed in. (More about “boxed in” later)

Another pleasant surprise is the UI. For a game as complex and sophisticated as Stellaris is, I found myself quickly turning off the aid provided via hints. This means that either the layout is quite intuitive… or I play way too many games for my own good. All kidding aside though, not only is the game easy to get into, but it is optimized extremely well. My modest machine has no problem running this game and it barely works up a sweat. I can’t overemphasize how crucial this is to a game’s success. Too many times I see indie Devs put out games that require a development grade machine to run them, as well as a six month course in how to navigate the UI.

While the exploration part of the game is done extremely well, research is kind of underwhelming. It isn’t that there are limited technologies to choose from,(quite the opposite in fact),  but rather the incoherent way that they are presented which leaves me scratching my head. You have three fields, and the technologies are randomized, you don’t know what tech will become available next, this makes it impossible to develop any kind of research strategy as you play.

At some point though you stop really caring about prioritizing what to research and you run out of room to explore. Your all too few colonies are humming along and you realize that ship design is superfluous, it is here that the game becomes something else. It is at this point where I find myself playing not a unique game, but rather bits and pieces from various other Paradox tittles. Combat reminds me of the EU series, leaders a touch of Crusader kings, resources evoke Hearts of Iron, etc.  But to be fair, they are all meshed quite harmoniously and nothing really feels too much out of place… it’s just not very unique.

Of course, we cannot forget all the DLCs available for this game, each of which adds new content and greatly enhances the best of what this game has to offer. The main problem for me though is that none of these DLCs attempt to deal with two glaring issues that I find hold this game back. (And let’s be honest, if anyone other than Paradox had created this game… it wouldn’t be getting the benefit of the doubt that it enjoys).

Yes, starlanes. Something I absolutely abhor in any 4x game set on the strategic level. Starlanes were fine in Freelancer, fine in Starfury and a host of other true sims, but when playing a 4X or strategy game set in space I want freedom of movement, not a stylized game of risk where I am artificially boxed in because the system next to me is not connected via one of these lanes. Let’s face it, to get a true feel for space we would need a three D map, but failing that, at least give us a map with free movement. If IG2 could do it exceptionally well decades ago, there is no excuse for this today.

But the starlanes as much as I detest them, are actually not the biggest issue this game has, that crown of mediocrity belongs to the war score system. In an effort to stretch out the game, Paradox has introduced its concept of war score and exhaustion to Stellaris, (hmm where have I seen that before?). Basically, I can cripple a rival’s fleets, bombard their colonies, sweep through several systems… and lose the war. If I don’t lose the war, then my efforts may be rewarded by the acquisition of a border system or two at best…

What am I not getting here? Space, is an environment where any conflict could be ended quickly by simply annihilating the opponent from orbit. Therefore, what should be a 4X game, turns into a strategy game reminiscent of WWI trench warfare…

And here is where being a rogue reviewer pays dividends. This game could have been outstanding and without equal, the reason it is not, is its own fault. It’s pretty, it has great writing, the exploration is a wonder to behold… and the game is completely unsatisfying as a 4X.