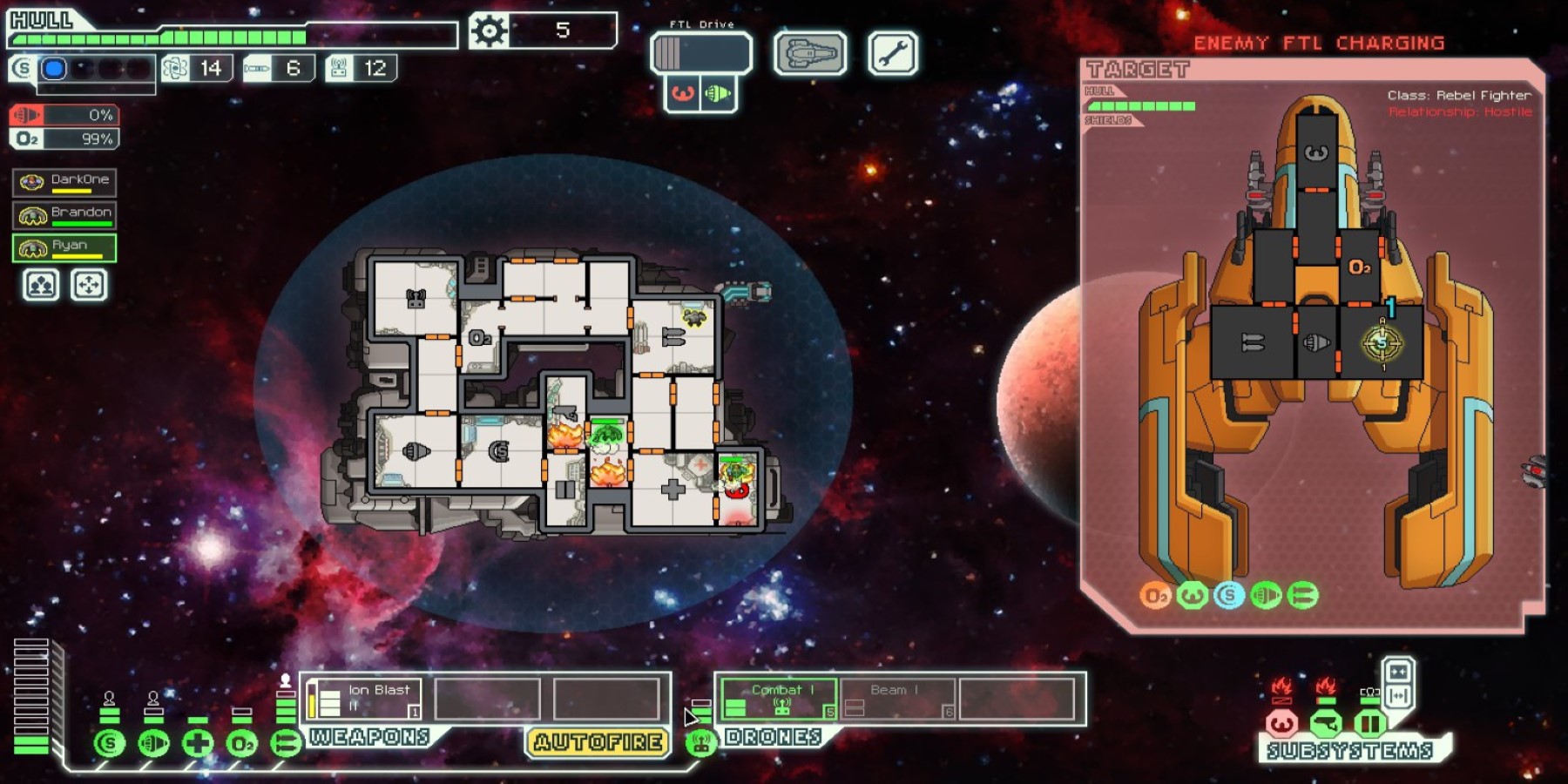 I have been playing this game off and on for about three months now (yeah I have had it for years and just now playing it …) and it is a nice game for someone that may not have a lot of time to game. Granted some play sessions could take some time, but if you make the wrong choices or run low on resources that keep your ship going your game could end sooner than you expect.

FTL has a simple story, you have a ship that is carrying vital data for the federation fleet and you are trying to get this information too the fedderation before the rebel force catches up to you.

In most of the instances in this game the rebel fleet is a threat yeah, but the biggest threat is yourself in most situations. Maybe making the wrong purchase at the wrong time, upgrading too soon or too late, helping lifeforms in distress, entering nebula or asteroid fields, having precious crew members get killed late in a play session. There are many dangers in your sector by sector journey to the Federation fleet.

The customization’s and gameplay mechanics are a great in my opinion, you have a lot of options for ship upgrades from the systems to the equipment/drones you use. The crew members also raise their stats as well during your journey when battling so you will earn benefits as their expertise increases.

Depending on the battles or encounter situations you will receive energy, scrap (the in-game currency), missiles, drone parts and occasionally equipment and crew members. These are very important resources and if you run out of any (especially fuel) it could be game over.

I will admit I have had a few frustrating moments with this game where I might have raged quit 😉 because I knew I was so close to winning or so close to the station to replenish needed supplies and I just happened to run into the wrong enemy ship wanting to take me down. FTL is challenging but can be rewarding as well. When certain ship systems start going down around the ship it can get really intense, especially when there is a fire or oxygen is dropping fast and your still being attacked. Certain situations in the game makes me rethink my desire for space travel at times haha

I know FTL is an older game now (came out in 2012). But if you haven’t tried it I think you should, you should be able to get it real cheap (under $5 on sale) but it will provide many hours of gameplay and hopefully happiness and not rage 😉

I won’t sugar coat FTL, it can be really hard and unforgiving (hence the rage quitting, haha) but I wouldn’t let that be a negative in trying the game. Because you will get better at managing your crew and deciding on which missions to do.

So give FTL a try – https://store.steampowered.com/app/212680/FTL_Faster_Than_Light/