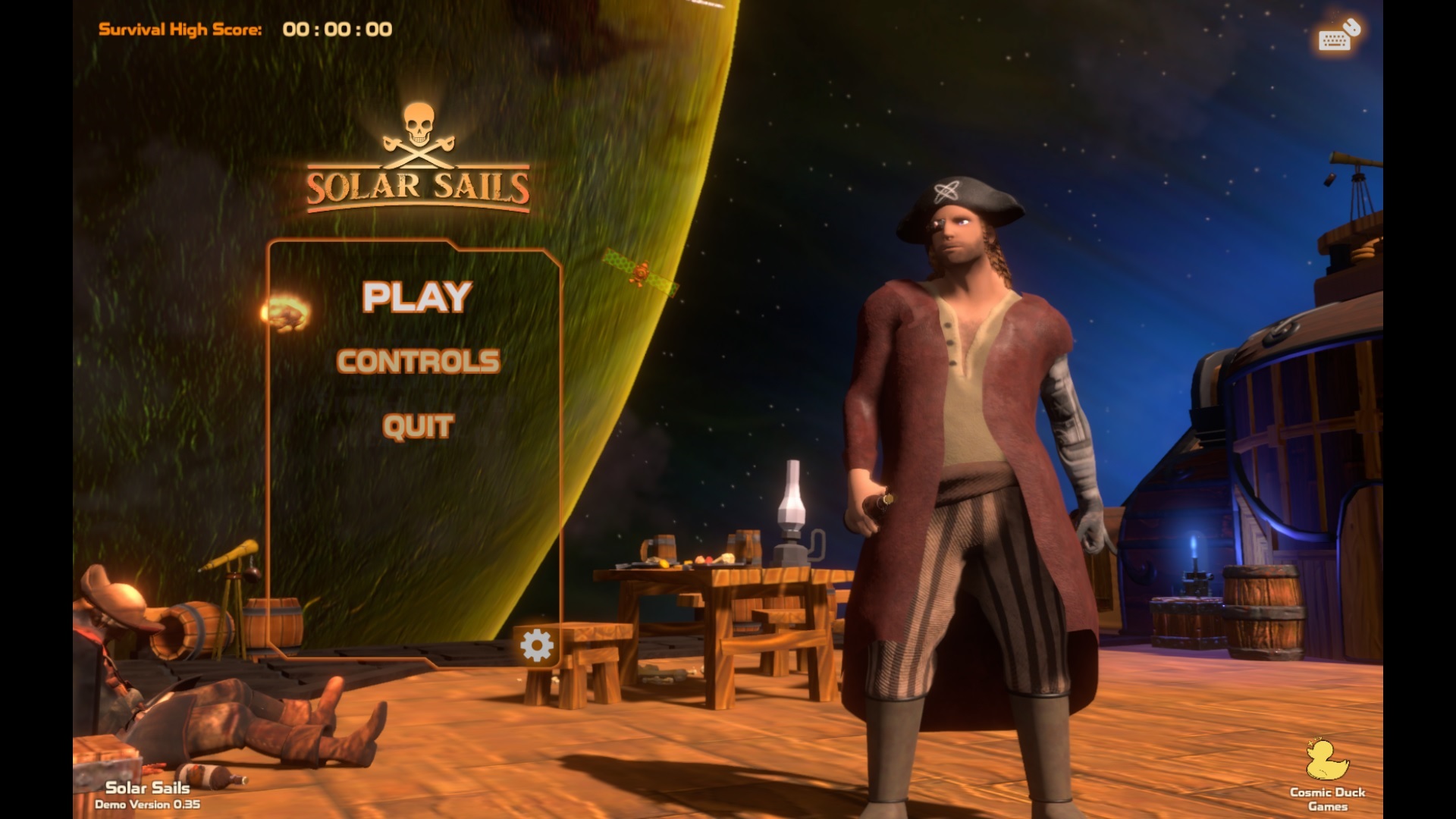 A sense of realism can go a long way in making a space sim fun and interesting. Solar Sails by Cosmic Duck Games however, takes an entirely different approach. In this game, you are a space pirate commanding a 17th century warship… in space. As a premise, this doesn’t only border on the absurd, it completely surpasses it! And yet, this game may just have the “it” factor.

I recently sat down with the demo version of this intriguing little game and I have to admit, I enjoyed myself tremendously. The concept behind this game is described by the developers themselves quite nicely below.

“The game takes place in a weird universe inspired by Lovecraft, various ancient mythologies, and the Gospel of the Flying Spaghetti Monster. It is inhabited by unique alien races and controlled by two human superpowers locked in a cold war which is about to explode.

Amidst all this mess, you control a team of space pirates, and your goal is to plunder the Galactic Federation spaceships and convoys, smuggle various illegal goods, and search for alien technologies to upgrade your ship. But be wary, the enemies know your tricks, so you better develop unique tactics against each of the enemies and bosses”.

The background story, not to be outdone by the setting, is equally psychedelic.

“The story revolves around four main characters – a gruesome self-loathing captain with morbid habits who mistakes his mast duck for a parrot, a schizophrenic underappreciated young engineer who searches for his long-gone cat because he can’t grasp the concept of death, a timid young cadet accused of intergalactic terrorism who seeks to restore her memory and find out the truth about her past, and a time-traveling mast duck who has seen the end of the galaxy in the near future and is henceforth determined to prevent it.

With the help of this unprecedented crew, you must collect 10 powerful alien artifacts, take control of a primordial alien weapon, and stop an ancient evil from obliterating the galaxy… Or sell the weapon to whoever offers more for it”.

With the stage set, I dove into the demo and one of the first things that pleased me was the simplicity of the controls. You’re navigating and fighting on a beautifully rendered 2-D plane, and it is easy as can be.

Another thing that had me laughing and smiling is that the absurdity in this game doesn’t restrict itself to the setting and characters. As I played through the demo, I was instructed to “raise shields”. When I did so and saw this below, I practically fell out of my chair. My shield is literally a metal barrier that extends from my ship via a giant spring, lol.

Overall I found the game easy to get into and a pleasant diversion, obviously the “purist” looking for a serious sim is not going to be pleased by this, but anyone just looking for a bit of whacky fun in an impossible setting will have a blast.

The game page is up on steam now, https://store.steampowered.com/app/1292310/Solar_Sails/ and anyone that wants to give the demo a spin can get it here https://www.indiedb.com/games/solar-sails/downloads/solar-sails-demo

Give it a try, you have nothing to lose but your sanity.