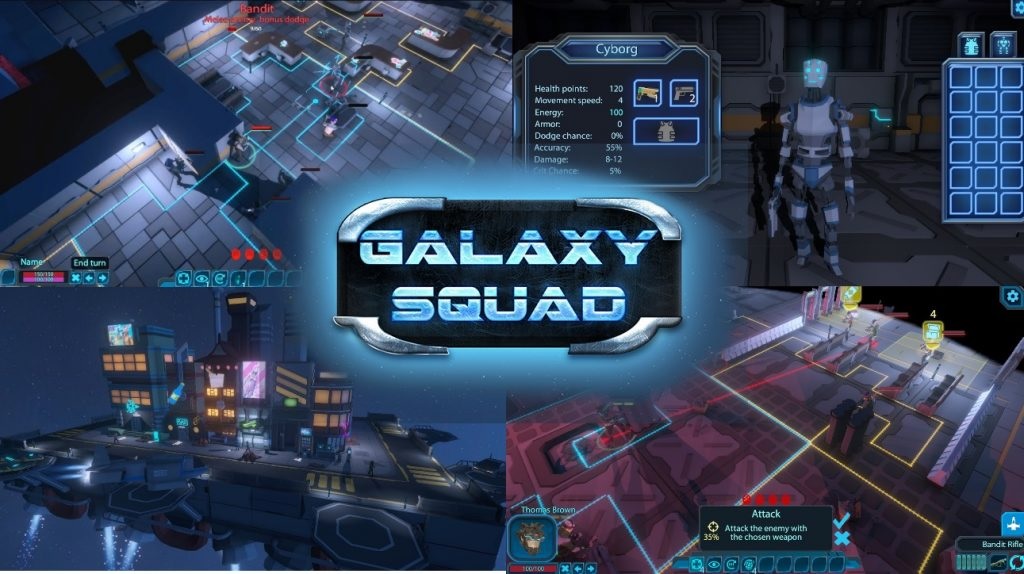 You know the kind of day, you’re sitting at home with a few hours to kill, so you figure it’s a good chance to play a game. You look at your library and nothing really catches your interest until you come across a game you forgot you owned…

Galaxy Squad, a rogue like, turn based tactical game by Kasakov Oleg turned out to be that game.

This indie title can best be described as the land based version of FTL. The player selects a ship and then travels around the galaxy from node to node to face different events and challenges. These events invariably see the (border-line) criminal crew engaging in small unit fire fights.

And basically… that’s about it. Oh your crew of mercenaries can level up (to a point), there are different weapons and equipment to acquire which will aid you, and even special abilities that are powered by resources (nice touch that). But as I played the game, it started to dawn on me that the setting was entirely superfluous. While Galaxy Squad is set in space, all the action is groundside, you have a ship, but basically it’s just a shuttle as there is no ship to ship combat. In other words, being set in space isn’t really necessary for this game to work. Personally, I feel the developer could have gotten a greater bang out of this game if he had included space battles. It would have made the game far more interesting and immersive.

To be fair, there is some exploration in this game, which will give a sense of discovery as you hop around from one node to another. There is also a considerable RPG element to entice you as you can engage in some side quests, hire additional party members, and look for neat gear to outfit your band of rascals. Adding to the RPG feel is your crew. You start with 3 types of classes available but you can open up another 3 as you play. Different classes have different abilities which you can select as you level up your team. The battles themselves are obviously the strongest aspect of the game… if you like small unit (and I do mean small) tactics. Battling it out means you’ll need to consider cover, line of sight, weapons, etc. However, some of the maps are ridiculously small, and that actually negates the effect that the terrain has on tactics and the decisions a player will need to make in order to fight well.  The actual mechanics of combat center around turn based action points. You can move and shoot or use special abilities.

Graphically, this game goes from “ooh pretty” all the way to “wtf?” Personally I don’t pay much attention to how a game looks, I prefer substance over looks… but man it can get bad here, you’ve been warned.

Overall I found the experience adequate and can even see limited replay value in the game. After completing a session, depending on how well you did, you get points which you then use to unlock some additional aspects of the game (and you really do want to unlock these as they offer different paths to choose, different play modes, and most importantly, different endings). In essence, I found the game pretty simple and effective, but I just can’t help but feel that it could use a moderate overhaul, such as cleaning up the text, but more importantly, some actual ship to ship combat. (Yes, your ships can add some effects to ground combat, but that just doesn’t cut it for me).