I extracted the models from vuzz genesia (btw most are anyway my or based on my work or are conversions from "ffed3d" or "sw-xwa").

In the recent state they will conflict a bit with the content of "Phoenix", caused mostly by same named sub-models with a slightly different function.

this i will fix and will compare the content to what i haveon my hd to see which is the most developed state. this can take some time and that's why i link this working but not well working mod for Phoenix.

Also i don't like to re-publish in future the model content of ffed3d, this will be the last time and i won't alter or update them.

The SW-XWA ships i will keep but only as a separate SW-mod.

certain ships which i have running in a more recent version like the original Pioneer content or the ships from FE2 i won't use from Genesia.

If you like to run this or that old ship in the recent Pioneer release call me up i can convert it but won't do it without request. My interest to work on the old tard is little to be honest. Also because it means to examine each script and correct this or that error resp. difference in sub-model or model-functions from Genesia to Phoenix.

One after the other but it has no priority to me, to be honest the recent Pioneer has absolutely no priority it's imho just overloaded with features and still no game.

looks good is like a dress model - it has no practical use.

today it just have to look good this will turn any lie to thruth as long as it "looks good".

The latest crap won't make a game - but "pixel mario" is one because it has a gameplay even if it has no graphics and no features except to jump with a thick pixel from one thick pixel to the next thick pixel and to avoid colliding with other different colored thick pixels.
Flapee Bird is a game even if you only have to press a single button to play it - it's challenging.

but well it seems to me it's not the only homebrew game which leaks of the vital part, probably it's wiser to start with something like "flapee bird" or "the government waffle project". for sure it will teach you what is gameplay and that you can squeeze out a lot of gameplay out of 8bit power and 16kbyte memory, features is that a new sandwhich spread? this "feature" is in your head.
"no rand? ok then lets use pi" it won't matter how advanced it is it matters in what troubles it will put a player.

"rand = 4 //this number was evaluated by fair dice roll"

it won't matter as long as you are in troubles while playing, you won't see that you will only see that he wears a giant sword (or whatever) and likes to steal the light from your eyes.

damned "ultimate intv soccer" an april fools gag by oscar is more a game even if you only have to dodge throwed coke cans. but it's at least fun for a few minutes.

We have a very good skeleton, Pioneer, i stated this already long ago.
One could say the game present and "you just have to pick up the loose ends".

But we have to do something with all that the game doesn't comes by itself.

We have a brillant challanging hard AI compared to other games where the AI acts like hollywood evils and never hit you even not if they shoot a 1000 times at you or with enemies which will never notice you until you stand in front of them and say "hello it's me the player and i like to kill you" (this impression i get when i watch the young dudes playing todays ego shooters - ah the goal of them isn't to make a good game the goal is to take money for every minute you play. often i have to laugh when they argue about that they have to buy this or that feature only to make common progress in the game, not your effort counts it matters only how much you can pay - stupid "don't you miss the good old days of plug and play gaming?" or "play a good open source game it's free maybe a bit crappy but can be fun for a long time for free"),

We have the possibilty to spawn a single opponent which will kill you mostly, i often argued about but also with this can be something made, but we have to use it and didn't spawn enemies this far from the player that they will never harm you. if a single opponent is as hard as ten then it still can be used, instead to fight down countless ships like in FE2 you will rather be proud to fought and stand a single one but this advantage/disadvantage must be used to become a game. if you lift the value of the single target i.e. it's not just some pirate you killed, it has to be THE PIRATE the whole galaxy is hunting after. if you give this single enemy a character, if he becomes somebody i.e. by repetive naming in the GNN.

Well at least Phil asked me to lean out my old SNES, his PS4 is down and he needs something to play, well as you can see...

if you are short in money a 30 years old SNES still can be as good as anything new.

He was the one who stated a couple of years ago that he will never again play the crap from his childhood...

never say never 😉
it will turn out different.

OK HERE ARE THE GENESIA SHIPS
(wit exklusion of the basic Pioneer content, Flowerfairy, IP Shuttle, Interdictor, Walrus, also the Eagle i removed it's present in the FFE mod)

like i said it runs with Phoenix but leads to some problems with the existing models because it overwrites some sub-models and functions i use for Phoenix. but to quickly run them it's ok, i have to check each model first and alter the use of the related sub-models / functions.

to be on the safe side you can simply disable most of the Phoenix ships.
This can be reached with adding to the related ship spec scripts a different suffix /i.e. .....lua.bak). only "ip_shuttle" and "ladybird_starfighter" and "lanner" (while "lanner" is replaced recently with "shuttle" and only used in the start screen, though exchange.lua and shuttle.lua must stay instead of "lanner") must be present to run the game. something i changed and will also again change as soon as i work on the source, "police_ship" instead of "ladybird_starfighter" and "default_ship" 1 & 2 instead of "ip_shuttle" and "lanner".

like i said the mod has recently some weird effects on the standard ships.

Oh Gernot, thank you so very much for this! The Genesia ships were wonderful and still are too! Cant wait to fly the Imperial Hunter again, love that ship! 🙂

i mean the mod was useless 🙂

I decided to use for Pheonix only these additional ships:

- Bloodrunner
- Boa (it's far from a FE2 Boa)
- Caiman
- Caribou (far from a FE2 Panther)
- Defender (updated version)
- Galactic Explorer (s20dan's Imperial Explorer also far from FFE's "Imperial Explorer, rather a small "Enterprise", i replaced the prefix "Imperial" with "Galactic" and resized the ship so it can be parked in docking bays (it still leaps out a little)
- Ghoul (Sol Commands "Ghoul Fighter", i didn't used Vuzz's conversions of the large ships because they hardly fit to "Phoenix".
- Hammerhead ("that still exists?!" yes it does!
- Lancet
- Moth (former Mosquito or ADC-44, which one do you like best?)
- Phoenix (former "Imperial Interceptor" i also liked to get rid of the prefix here and thought "Phoenix" suits, my first idea was "Angel" which would work to)
- Sepia
- Shift
- Talon Military Interceptor
- Terra
- Typhoon
- Venom (former Viper-X) 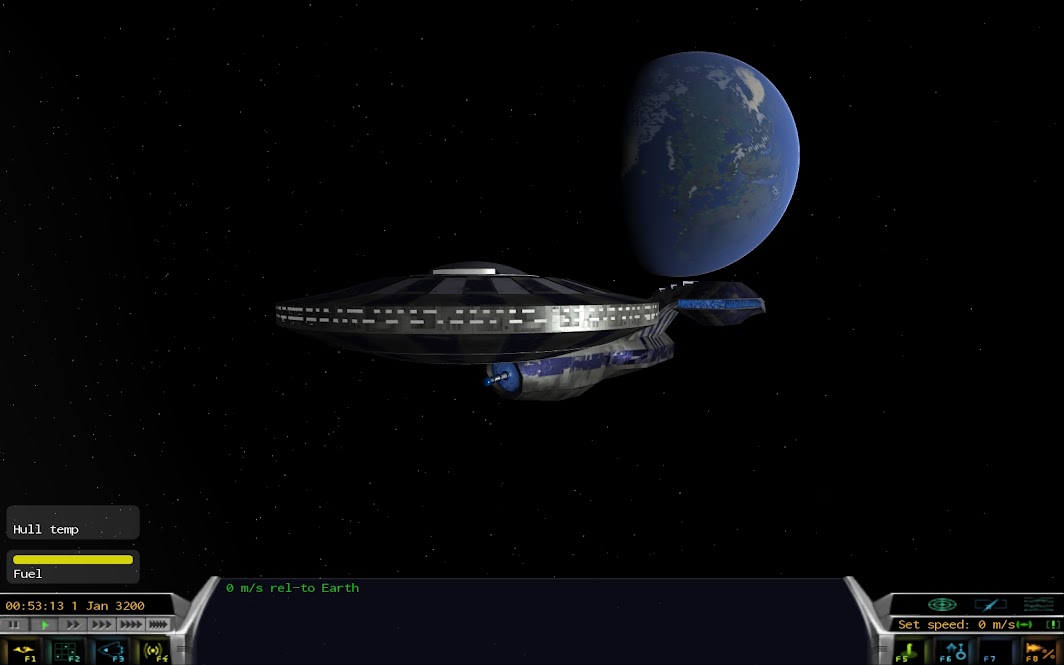 Ships which i moved to a mod because i think they are only good as optional ships, personally i don't use them.

- Large Galactic Cruiser (i don't like this "bearded" Ship and it didn't even suits well as "bulk ship".

- Meteor (it would be a candidate but somehow it's to primitive, if you like to see it in Phoenix i can use it as well)

- Turtle (same as for the Explorer, it would fit but has a bad animated landing gear)

The FE2/FFE ships leaned out from FFED3D or what i created later for either games i will publish as a seperate mod to the "FFE mod" (to use optionally the higher detailed versions).

All SW-XWA ships.i will re-publish as a SW mod to "Phoenix", similar as the "FE2/FFE mod" it will replace them with a own set and change some of the environment of the game.

Both mods are under construction, means first i will work further on the FFE mod then i will start to fit the SW ships they have no priority and are very low detailed simple ships with low-res textures, probably i will rework the textures like a did that for the "Scout" (SW version) it would pimp them certainly somewhat up.

But first i have to get rid of some small errors, besides this won't be the final release of them, the Boa needs a better landing gear and also some other models need some enhancements but i'm satisfied for the moment if they run flawless.

Especially the additional ships can still contain errors and leak of anything extra, also they haven't a high priority to me.

If you like to have one of the ships i didn't used in those two mods you will have to ask for (that is mainly the "Yacht" and the "V Destroyer" which are both simply to large for the game and neither they fit in style to the rest.