Think Sept was mentioned before, just in time for Christmas.

September is often mentioned on the forum, yes - September 20th being the thirtieth anniversary of the release of BBC Elite. However, FD themselves have announced no dates. I reckon that the Gamma release may well have appeared by then - but who knows when the full retail version will hit the market. I'd agree with Pinback about the Xmas thing though - it would seem ideal.

They seem to have stepped up a gear as the news letter have started appearing weekly now, Sept/Nov usually the time most companies release games in order to hit the Christmas rush. So unless their are any delays I think it would be a good bet that we will see the digital version around about that time with the disk version coming later.

Some new pic from Frontier.

I forked out the Â£100 last week and thought its not a bad deal for early access and the full game with plenty of addons to come. Hell, I played the original for months on end, so that was great value too. Just think about what you can do with a hundred quid today...you sure wont get hours and hours, days and days, weeks, months or even years of gorgeous space exploration like in ELITE DANGEROUS. Yeah ive got my Freelancer too, but im sure ill spend a lot more time in the real exploration of ED than the fictional SC. I'll be getting my telescope out to see my area of ops 😉

Less than 2 days folks, have fun, and take care ya'll out in space...

Less than 2 days folks, have fun, and take care ya'll out in space...

Ok so when does the stantard beta start I have been waiting on SC but would like to play something sooner than later.

Don't want to spend $150 but willing to spend $75 plus additonal $50 for expansion pass just wondering when it will come out (stantard beta)?

Thanks in advance for any info.

They say in the Frontier Forums that Standard Beta Phase will start after Premium Beta Phase has completed which starts today.

But they do not say how long Premium Beta Phase is. It has taken 2-3 months to complete Alpha Phase so it only a guess that Premium Phase might just as long or longer.

Premium Beta Phase is the first step to introduce Multiplayers which they need to sort out any bugs.

As most of you will know the premium Beta has started in ED.

Premium Beta Phase Starts!
The Premium Beta phase starts today with all the major features that have been added through the four Alpha phases. The immediate focus is on testing the systems and servers with a step change in numbers using a re-balanced game based on feedback and information from the recent Alpha 4 build.

More than 10,000 additional people, a number which is growing daily, are today able to earn credits to upgrade their ships and weapons by blazing their own trading, piracy and bounty hunting trail though five star systems covering a 200 cubic light year volume of space.  There are a range of different economies and governments, ranging from Anarchy to Federal Democracies to Corporate-run systems.

Nice vid of the Anaconda  😎

This music use in the vid sounds familiar is a classical track or a film track ?.

I suspect it's in-house music - but I don't know for sure.

I suspect it's in-house music - but I don't know for sure.

Very likely it is but it reminds of some film music, possibly Gladiator.

Just started to play with the multiplayer premium beta. I could play with it, but I get 4 of 5 crashes (I have not been able to exit the game normally, ahem    ). Except that, I liked everything I saw.   this is multiplayer, but I saw very few peoples. Where the hell are you, SSC squadron pilots ?  🙂

I'm only a standard Beta - I'm also a lone wolf player, and much like Pinback, I will probably go the solo online route.

It's quiet everywhere - as is my wont, I'm quietly playing Oolite.

According to the latest newsletter Frontier will be at E3

Next week were are attending the E3 conference in Los Angeles.

David Braben, Adam Woods, Producer on Elite: Dangerous and the team will be there to demo all the features of Premium Beta to games journalists from all around the world. We will have the game set up on a number of PCs and a couple of them will be set up to show Elite: Dangerous with Oculus Rift headsets. Feel free to drop in if you're at E3.

Following our competition on the forums, we are also very pleased to have Elite Ambassadors, Robin Barnard aka. Dr. Wookie on the forums, Gwen Beale and Jon Virgo, aka. Kerrash joining us. Who better to demo the game than backers who have been playing it avidly since the Alpha started.

Alpha backer Gwen Beale, who made the amazing Cobra Mk III model we featured in Newsletter 21 will actually be bringing her model to the show to be featured in our demo area.

David will also be interviewed live on stage by Gamespot who will be streaming the interview on their site and through Twitch â€“ You will be able to tune in at 11am LA time which is 7pm in the UK on Thurs 12th June and follow the stream.

About time they got out their and started banging the drum a bit more.

Gwenydd's 1/44 scale model of the Cobra MK III is now proudly on display at E3 - the lady can sure cut and shape metal! 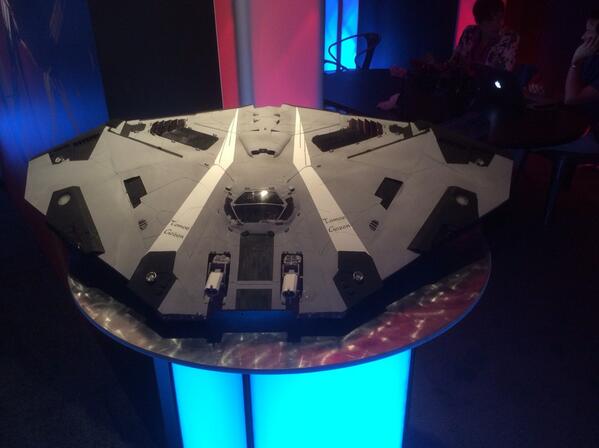 News letter out and some nice pics of a new station. 😎

An Orbis Station taken at different times of day in 4K.

Orbis starports are much more complex structures, and hence more expensive to construct, than Coriolis starports. The large wheel has a diameter of about 8km, and provides a full Earth-like standard gravity environment.  The smaller wheel further back offers a very pleasant half a â€˜geeâ€™ â€“ suited to manufacturing, but mainly used as a luxurious retirement home for the wealthy, as the lower gravity can be more comfortable, and puts much less strain on the bodies of the more frail.  Orbis stations also have a very large storage capacity for tradable commodities, which can be seen beyond the half gee wheel.

Big news in the letter is that anyone in the standard beta can now upgrade to the premium beta for Â£15 so two questions.

2 and what happens if you lose the download link when downloading do you have to start again?.

Wish I could accurately answer that Pinback but I would only be guessing. The best bet is to ask the Elite store itself, here is a link.

Wish I could accurately answer that Pinback but I would only be guessing. The best bet is to ask the Elite store itself, here is a link.

Sent off, now just a wait to to see what answer I get back although I am expecting the download to be a few GB.

Guess I am going to have to sort out my broadband connection.

News letter out and some nice pics of a new station. 😎

Big news in the letter is that anyone in the standard beta can now upgrade to the premium beta for Â£15 so two questions.

2 and what happens if you lose the download link when downloading do you have to start again?.

I'm not sure what happens to an interrupted download, but best to assume you have to download the lot again.

I'm not sure what happens to an interrupted download, but best to assume you have to download the lot again.

Thought it would have been bigger.

I know its not a massive download, not like another certain space sim I could mention but wont!