Elon Musk's nuke and a picture of it 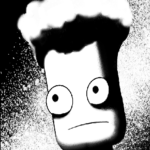 Elon Musk came with an interesting but controversial idea. The idea proposed making Mars fit for life and subsequent colonization with the help of thermonuclear weapons. On the air of the program, Musk reflected on space travel and ways to colonize Mars. What do you think about it? According to the CEO of SpaceX, colonists on the red planet will have to live in transparent houses until their atmosphere becomes suitable for human habitation. Raising the temperature in the atmosphere of Mars is possible by the nuclear bombardment of the poles, and increasing the concentration of greenhouse gases is a slow way.

As a man who fell in love with astronomy and space in general, I wonder when we will have cameras that can casually take pictures of far space planets or even our planet earth.  I bet that these cameras will be sold by SpaceX, Dragonfly Aerospace etc. Because these companies are very close to space missions and space in general, so I have no doubts that the first good technologies and pieces for the civilian tech are going to be sold by them. It will open so many opportunities for directors, produces, and photographs that may influence on film industry overall.

And I want them to become a thing faster because if this crazy man is going to do a nuke on Mars, I'd pay lots of money to see it by my eyes 🤣

This topic was modified 3 weeks ago by JackWhite
Quote

Pretty sure that's an old idea about terraforming Mars with nukes from the 1960s or 70s and IIRC was abandoned as unworkable.

This post was modified 1 month ago by Pinback
ReplyQuote

And smoking a lot of dope!

The light at the end of the tunnel is the light of an oncoming train!

Pretty sure that's an old idea about terraforming Mars with nukes from the 1960s or 70s and IIRC was abandoned as unworkable.

LOL, this is probably what he's been doing while considering his idea for sure. Madness and genius go close together I guess.